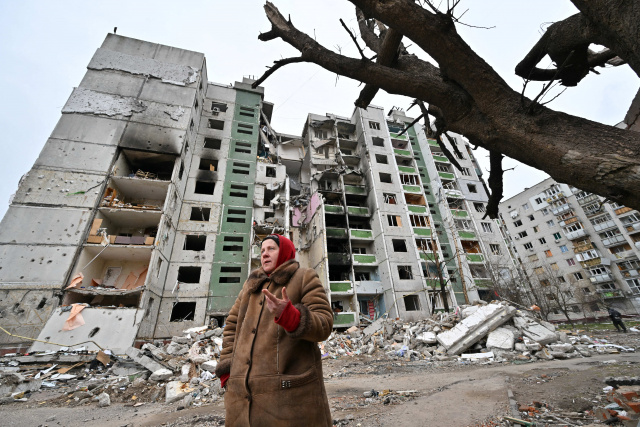 A woman stands by a destroyed appartment building in Chernigiv on April 5, 2022, amid Russian invasion of Ukraine. (Sergei SUPINSKY / AFP)

(AFP) - Pope Francis said in an interview published Tuesday that he requested a meeting with Russian President Vladimir Putin over Ukraine, while comparing the scale of the bloodshed to Rwanda's genocide.

The pontiff told Italy's Corriere Della Sera newspaper that he had sent a message to Putin around 20 days into the conflict saying that "I was willing to go to Moscow".

"We have not yet received a response and we are still insisting, though I fear that Putin cannot, and does not, want to have this meeting at this time," Francis said.

"But how is it possible to not stop such brutality? Twenty-five years ago, we lived through the same thing with Rwanda," he said.

About 800,000 people were killed between April and July 1994 as the extremist Hutu regime tried to wipe out Rwanda's Tutsi minority, in one of the 20th century's biggest massacres.

The pope has repeatedly called for peace in Ukraine and denounced a "cruel and senseless war" without mentioning Putin or Moscow by name.

"I'm not going to Kyiv for now. I feel I shouldn't go. I have to go to Moscow first, I have to meet Putin first," he said.

Dialogue with the Orthodox Church, which separated from the Catholic Church in 1054, is a priority of Francis's pontificate.

But since Russia invaded Ukraine on February 24, the pope's calls for peace have contrasted with Kirill's defence of Putin's fight against Russia's "external and internal enemies".

In the interview, the pope also addressed the pain in his knee that has forced him to cancel various public engagements in recent months.

"I have a torn ligament, I will undergo an intervention with infiltration, and we'll see," he said.

The Vatican would not say what the pontiff was being injected with or when, but a source told AFP the ligament problem was linked to chronic arthritis in his right knee.

Infiltration can involve injecting drugs directly into inflamed or damaged joints and has an immediate effect.

"I've been like this for a while, I can't walk," Francis told Corriere della Sera.

"Once upon a time, popes were carried on gestatorial chairs," he said, referring to the ancient shoulder-carried ceremonial throne on which popes were borne aloft until 1978.

He appeared to rule out reviving the throne.

"A bit of pain, of humility, is necessary," he said.

Francis told a newspaper in Argentina in April he was treating the torn ligament by putting ice on it and taking some painkillers.