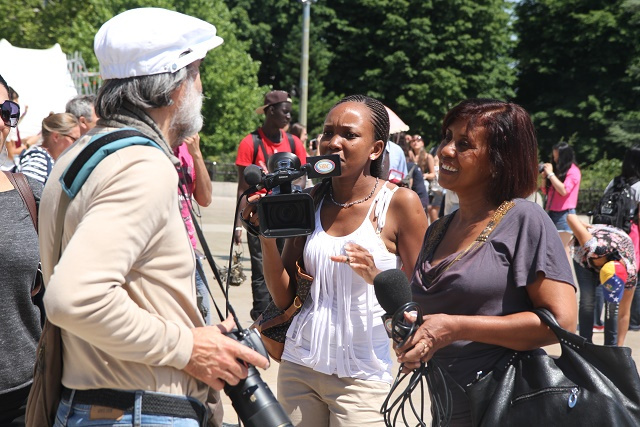 Ramkalawan in his message encouraged journalists already in the profession to give their very best as they build the fourth pillar of the Seychelles democracy. (Seychelles News Agency)

(Seychelles News Agency) - Seychelles is the top African country on the World Press Freedom Index as the island nation takes 13th place in the ranking for 2022.

The island nation moved up 39 places after being ranked 52 last year on the index published by Reporters Without Borders (RWB), a Paris-based non-governmental organisation. The release of the ranking every year coincides with World Press Freedom Day on May 3, a date that celebrates the fundamental principles of press freedom around the world.

In his message on the occasion of the World Press Freedom Day, the President of Seychelles, Wavel Ramkalawan, said that the Seychelles ranking has fulfilled his wish.

During his address to commemorate six months in office on April 26 last year, after Seychelles had progressed 11 points on the Index, Ramkalawan launched a challenge to move Seychelles from the 52nd place to under 25 worldwide and to become first in Africa.

In his message, Ramkalawan said "I am proud to note that this target has not only been fulfilled but has even surpassed our expectations... The challenge today is for us to do even better. I call on more young people to take up the noble career of journalism and I encourage those already in the profession to give their very best as they build the fourth pillar of our democracy."

The chairperson of the Association of Media Practitioners in Seychelles (AMPS), Rassin Vannier, who is also the chief editor of the Seychelles News Agency (SNA), said the ranking is good news for journalists.

"This is a result of the decriminalising of defamation last year thus removing one of the biggest obstacles to journalists effectively doing their work," said Vannier.

This was highlighted in the report which states that "defamation was decriminalised in 2021 – a major advance that followed the adoption, three years earlier, of a law on access to public information. The confidentiality of sources is protected, and each outlet has its own ethical code."

Vannier however warned that the biggest threat to journalists is social media, especially from people who hide behind fake profiles.

To note, while the country has done well this year, there have been some instances of journalists physically being hindered in their everyday jobs. In 2006, Jean-Francois Ferrari who is presently the fisheries minister was assaulted during his party's quest to establish Radio Freedom.

The survey also highlighted the fact that Seychelles is one of the rare countries on the African continent where most of the journalists are women.

For the past four years, Seychelles, an archipelago in the western Indian Ocean, has continued its climb in ranking in the World Press Freedom index – now ranking 13 out of 180 countries. The Nordic countries -- Norway, Denmark and Sweden -- took the first top three spots while Iran, Eritrea and North Korea were the last three on the ranking.

This year the index was compiled using a new methodology to take better account of new challenges, including those linked to media digitalisation.

Another change in the data gathering this year, although the survey stopped at the end of January 2022, updates for January to March 2022 were carried out for countries where the situation had changed dramatically, such as Russia, Ukraine and Mali.

The survey assesses on the basis of a quantitative survey of press freedom violations and abuses against journalists and media, and a qualitative study based on the responses of hundreds of press freedom experts selected by RWB – which includes journalists, academics and human rights defenders.