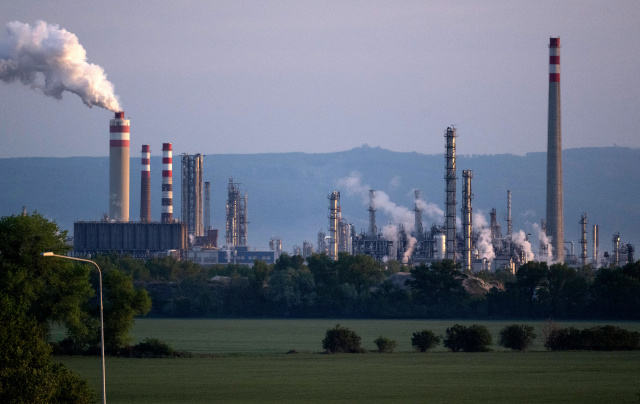 Picture taken on May 3, 2022 shows a general view of Slovakia's largest mineral oil refinery Slovnaft in Bratislava, Slovakia. Slovakia and Hungary, EU's most reliant countries depending on Russian fossil fuels, have repeatedly said they would not sign up to sanctions involving energy. European Union ministers met on May 2, 2022 to respond to Russia cutting gas supplies to Poland and Bulgaria -- and discuss plans for a possible oil embargo to punish Moscow for invading Ukraine. (JOE KLAMAR / AFP)

(AFP) - The European Union's executive unveiled Wednesday plans for a gradual ban on Russian oil imports as part of a raft of new sanctions to punish Moscow for invading Ukraine.

The European Commission also proposed slapping sanctions on Russia's biggest bank and on Patriarch Kirill, the head of the Russian Orthodox Church.

If approved by member states, the oil ban would be the EU's toughest move yet against the Russian energy sector, which helps the Kremlin finance its war.

But it will still not touch Russia's huge gas exports -- and several EU member states are demanding an extension while they secure new sources of fuel.

The proposal "cannot be responsibly supported in this form, we cannot responsibly vote for it," said Hungary's Foreign Minister Peter Szijjarto in a Facebook video message.

The oil embargo would be part of the bloc's sixth sanction package and would be phased-in over the rest of the year. It needs to be adopted unanimously by the EU's 27 countries.

The EU is the biggest consumer of Russian crude. Last year Russia supplied 30 percent of the bloc's oil and 15 percent of its petroleum products.

"We now propose a ban on Russian oil. This will be a complete import ban on all Russian oil: seaborne and pipeline, crude and refined," European Commission chief Ursula von der Leyen told the European Parliament.

But, she added, "we will make sure that we phase out Russian oil in an orderly fashion". The ban would come in gradually over the next six months, and for refined fuels by the end of the year.

EU ambassadors met on Wednesday to assess her plan and hoped to overcome their divisions by the end of the week, diplomats said.

Kremlin spokesman Dmitry Peskov -- whose wife, son and daughter were also targeted on Wednesday -- said the EU would "pay a high price in trying to hurt us.

"The cost of sanctions for the citizens of Europe will grow by the day," he added.

The proposal asks that Hungary and Slovakia, both dependent on Russian oil, be given an extra year to meet the ban, according to a document seen by AFP.

"We support the toughest sanctions possible against Russia... but from the start we have been saying the sanctions must not harm Czech citizens more than Russia," he said.

German Economy Minister Robert Habeck said the embargo could lead to supply "disruptions" and price increases, but that Berlin backed it, having overcome earlier reluctance.

Confirming his fears, oil prices soared more than four percent to above $108 a barrel when news of the plan hit the markets.

"As the EU tightens the sanctions screw... worries about global supply have reared up again," said Susannah Streeter, senior analyst at Hargreaves Lansdown.

By hitting Sberbank and two other banks, "we hit banks that are systemically critical to the Russian financial system and Putin's ability to wage destruction," she said.

Her proposal also targeted Patriarch Kirill, calling him "a long-time ally of President Vladimir Putin who has become one of the most prominent supporters" of the war.

Kirill once described Putin's rule as a "miracle of God" and has railed against the "forces of evil" opposed to a historic "unity" between Russia and Ukraine.

Von der Leyen said the new list also includes Russian military personnel deployed to Ukraine "who committed war crimes in Bucha and who are responsible for the inhuman siege of the city of Mariupol".

"This sends another important signal to all perpetrators of the Kremlin's war: We know who you are, and you will be held accountable."

The EU also proposed banning more Russian broadcasters from the airwaves in Europe.

The bloc has already banned media outlets RT and Sputnik in March and pressured tech giants to remove them from their platforms.