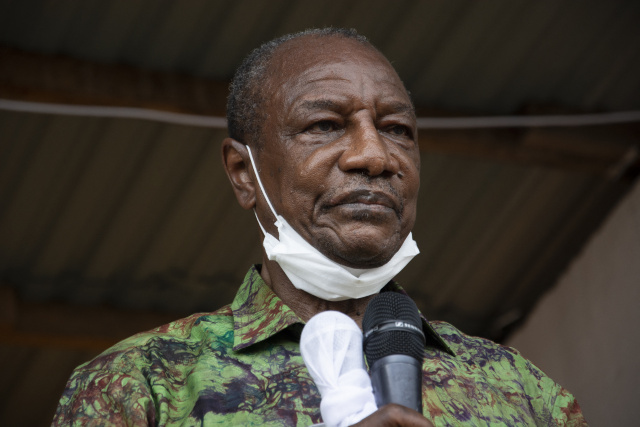 (FILES) In this file photo taken on October 12, 2020 Guinea President Alpha Conde addresses his supporters during a campaign rally in Kissidougou. Conakry's public prosecutor, appointed by Guinea's ruling junta in 2021, announced on May 4, 2022 that they will prosecute former President Alpha Conde and some 30 former senior officials under his presidency, for murder, torture and kidnapping. (CAROL VALADE / AFP)

(AFP) - Guinea said Wednesday it would prosecute former president Alpha Conde, who was toppled in a military coup last September, for murder and other crimes committed during his time in office.

Conde is among 27 former senior officials who face prosecution for "murder, assassination and complicity," according to a document given to journalists by prosecutor Alphonse Charles Wright.

Other alleged crimes include detention, torture, kidnapping, disappearances, rape and other sexual abuse and looting.

The list of names includes a former president of the constitutional court, ex-speakers of parliament, a former prime minister and many former ministers, legislators and heads of the security services.

In a message to AFP, Wright, who was appointed by the junta, said the prosecution was launched following a complaint filed in January by the National Front for the Defence of the Constitution (FNDC), an umbrella group that had spearheaded protests against Conde.

The documents given to journalists appear to focus on alleged crimes committed in the last two years of Conde's presidency.

Conde, today aged 84, was ousted by mutinous soldiers amid anger at his successful bid for a third term.

In 2010 he had become the first democratically elected president in the history of the West African country.

But his popularity dived in his second term as critics accused him of authoritarianism, and opposition protests were violently repressed. Dozens died, the overwhelming majority of them civilians.

The prosecutor noted that during the protests, security forces were attacked and killed, police buildings were vandalised and weapons seized, and that demonstrations took place without authorisation, raising the prospect of action against the organisers.

Tension escalated bloodily in the runup to elections in October 2020.

The vote, boycotted by most of the opposition, followed a controversial referendum on constitutional change months earlier.

Critics said that Conde was limited to two terms in office, but he argued that the change to the constitution meant that the clock had been reset to zero.

He was deposed on September 5, 2021 by army officers led by Colonel Mamady Doumbouya, a former special forces commander.

French firm Bourdon and Associates, which represents the FNDC, said in a statement that it was pleased "that Guinean courts will act to fight against impunity," calling it a "first step".

Since Conde's ousting, Doumbouya has been sworn in as interim president and implemented a crackdown on alleged corruption by the former regime.

Conde's future became a major issue between the junta and the regional bloc ECOWAS after the coup.

He was initially detained and then allowed to go to the United Arab Emirates for medical treatment in January, returning home on April 10.

On April 22, the junta declared it was informing "national and international opinion that the former president of the republic is finally free" -- an assertion contested by Conde's Rally of the Guinean People (RPG) party.

Mineral-rich but deeply poor and saddled with a reputation for corruption, Guinea has enjoyed few periods of stability since gaining independence from France in 1958.

Many Guineans initially welcomed the coup but there is growing discontent in the nation of 13 million people.

On April 30, Doumbouya said he planned to restore civilian rule in 39 months -- a timeline that dismayed those clamouring for earlier elections.