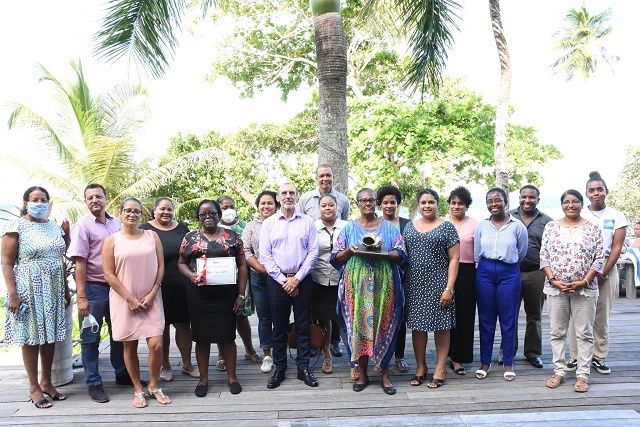 Around 15 Seychellois journalists, mostly women, from different media houses in the country participated in the workshop. (Seychelles Nation)

(Seychelles News Agency) - Challenges faced in the workplace, work-life balance and ideas on how to improve work conditions for women in the media industry in Seychelles were the subjects discussed in a workshop held on Wednesday.

Themed 'Journalism and Feminism in Seychelles', the workshop saw the participation of around 15 Seychellois journalists, mostly women, from different media houses in the country.

Organised by the Association of Media Practitioners Seychelles (AMPS) in collaboration with the French Embassy, the workshop coincided with World Press Freedom Day celebrated on May 3.

The chairperson of AMPS, Rassin Vannier, also the chief editor of the Seychelles News Agency (SNA) said such a theme needed to be addressed as Seychelles has more women working as journalists compared to other countries in Africa.

This was stated in the latest World Press Freedom Index produced by Reporters Without Borders, where Seychelles came out top in Africa and 13th place worldwide.

Furthermore, French Ambassador Dominique Mas said that the theme chosen is important as "gender-based violence is an issue in all societies and it is very important to talk about and tackle this issue."

He added that women in the media are better placed to provide a voice to victims and as such help bring awareness around the subject and reduce gender-based violence.

One of the participants in the workshop, Sylvie Ah-Time, a radio presenter at PURE 907 - a local radio station – and TV presenter on the Seychelles Broadcasting Corporation, shared her thoughts on the session, saying it was a great opportunity for women in media to share their experiences and challenges.

"During the session, a radio presenter who has worked in the field for over 30 years - Telma Pool - shared the sacrifices that she had to make as a woman in the media, especially when you have children. The balance between work and family was greatly talked about," said Ah-Time.

Women empowerment, training provided, access to information and women versus men in the field were also discussed.

"We also heard interesting propositions such as how big media houses that employ a large number of women could consider the opening of a childminding facility within the workplace after school hours, allowing the employee to still be productive even outside normal working hours. Flexible hours were also something that was discussed," continued Ah-Time.

Vidya Gappy, a female journalist from the Seychelles Nation newspaper, reiterated the need to have flexible working hours.

"Journalists can have more control over how they work and for those who can, they should be allowed to work from home especially when their children are on holiday," she said.

"The biggest change that needs to happen has to do with our behaviour among ourselves and our peers. We need to better understand each other as we all face different situations and we should be able to support each other, regardless of our gender. We should be ready to chip in when a person misses work or is dealing with an urgent situation," Gappy continued.

AMPS recognised the career of a well-known journalist, Anne Marie Collet, for her significant contribution to the media industry in Seychelles, with the chairperson presenting her with a trophy. Collet has over 40 years of experience in media, produced and directed one of Seychelles' first local programmes, which was a musical programme. In the past,  Collet received the Nelson Mandela Trophy for her television work as well as a prize from the Union of National Radio and Television Organisations of Africa.

In her address, Collet said that she encourages women to make a career in the media despite challenges that will come along the way.

"There are good sides to the job. Through journalism, you get to learn a lot. As a journalist, when speaking to an interviewee, the key to the interview is to listen to the person and this will help you know which questions need to be asked. This will help greatly with the final product," she advised.

In the print media, Seychelles Nation's chief editor Marie-Anne Lepathy was awarded a certificate of recognition for her long years of service as she has been working for 34 years in the newspaper industry.

"Every day I would wake up and never think I would get rewarded for the work that I do. It's because I love what I do. I enjoy what I do and I will continue doing it," said Lepathy.