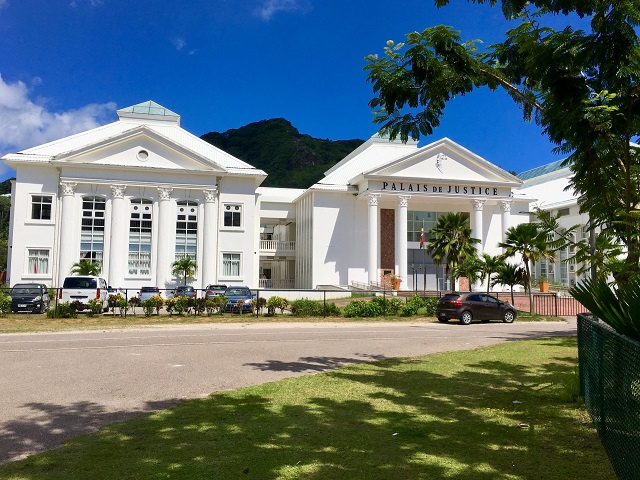 The Palais de Justice which houses the Supreme Court. (Judiciary of Seychelles)

The money laundering case of the 'missing $50 million' from Seychelles' government accounts has been temporarily transferred to the Office of the Attorney General.

It was revealed in the Supreme Court on Friday that the powers of the Anti-Corruption Commission of Seychelles (ACCS) to prosecute six defendants are limited both in time and in regards to the offences until amendments are made to the Anti-Money Laundering and Financing of Terrorism (AMLFT) Act 2020.

The case, which concerns $50 million of funds granted to the government of Seychelles by the United Arab Emirates in 2002, was brought forth by the ACCS in December of last year and is the largest corruption case ever brought before the courts.

According to court papers, Edmund Vickers, counsel for the ACCS, said that "the ACCS had consideration to the delay caused by the ACCS and does not wish to oppose bail conditions, therefore, asking the Court to release all of the defendants in the Anti-Corruption case on bail subject to two conditions: surrender of passport and prohibition from leaving the jurisdiction."

The six accused in the case are Mukesh Valabhji, a prominent businessman and former chairman of the Seychelles Marketing Board (SMB); his wife Laura – a lawyer; Sarah Zarqhani Rene – wife of late President France Albert Rene; Leslie Benoiton – a senior officer in the Seychelles Defence Forces; Lekha Nair – former CEO of the Seychelles Pension Fund, who was director general in the Ministry of Finance at the time the funds went missing and Maurice Loustau-Lalanne – former finance minister and formerly a COSPROH board member.

Nair and Loustau-Lalanne were already previously released on bail, while Zarqhani Rene is the only one among the accused released on bail following Friday's hearing as Mukesh Valabhji, his wife Laura and Leslie Benoiton are still being detained on terrorism charges in a separate case concerning arms and ammunition.

The case was stalled as the ACCS is waiting for the bill for the amendments to the Anti-Money Laundering and Financing of Terrorism (AMLFT) Act 2020 to go before the National Assembly for approval next week. It was gazetted on Friday.

The amendments proposed to the AMLFT will allow ACCS to investigate and prosecute offences of money laundering committed prior to the enactment of the act, as the offences are alleged to have taken place from 2002 onwards.

The presiding judge in the case, Chief Justice Rony Govinden said that "the court is informed that it (the bill) will be voted by the assembly shortly. It is for this reason that the ACCS has accepted the enlargement of the accused on bail."

Basil Hoareau, the lawyer for Benoiton, Nair and Loustau-Lalanne, expressed concern over the statement that the law will be passed by the National Assembly.

"Members of the National Assembly are supposed to be independent and we don't know what they are going to do. So, if a statement is being made that the Bill will be amended, I ask myself does that show that there is connivance between the executive and the legislature?" asked Hoareau.

Another development in the corruption charges, Leslie Benoiton – an ex-military officer – has been removed from the case leaving the Attorney General's Office to decide what charges will be laid against him. He will, however, continue to appear before the court for the arms and ammunition case.

The Valabhji couple, former Brigadier Leopold Payet and former presidential security officer Frank Marie are the others accused in the terrorism case that the court plans to hear in December.

Now that the accused not involved in the arms case have been released on bail, Hoareau said, "when these people were being charged, I had raised the exact points the ACCS is taking into account. I raised the issue of whether these people may be charged under the AMLFT Act due to the fact the alleged offences took place in 2002."

He also raised the point of misjoinder of accused persons "because due to the various charges the individual accused are charged with, they could not be joined under one charge - to which ACCS took into account and said it would consider."

"The fact remained that it took them over five months to realise the points that I raised in relation to the retrospective effect of the 2020 Act, which means that the accused persons should have been charged under the 1996 Act," he added.

Meanwhile, with the latest development, Govinden voiced his concerns about the gravity of the charges before the court and the public interest that this case has generated and is still generating.

"This calls for the rights of the accused to be at liberty to be balanced with the greater public interest herewith, that serious offences such as the one before the court are treated seriously and are given a chance to be prosecuted".

"It will be an abhorrence to the principle of justice for these charges to be suddenly dismissed and the accused to be given an opportunity to flee and thus deviate the course of justice," he concluded.

The accused are due to appear before the court on May 20.

General » Be a reporter: Write and send your article » Subscribe for news alert
Tags: Anti-Corruption Commission of Seychelles, anti-money laundering and financing of terrorism