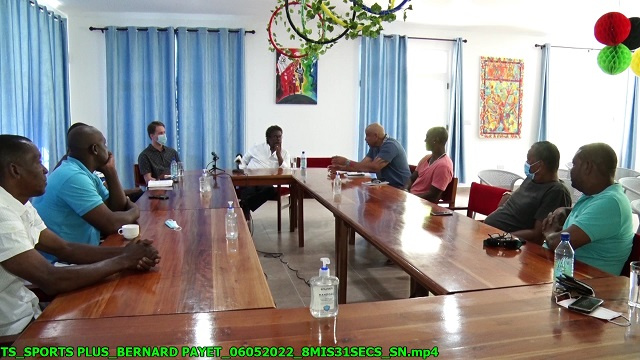 (Seychelles News Agency) - Local coaches in Seychelles on Friday learned about the various aspects of mental coaching with a Seychellois expert who lives abroad and has worked with high-level athletes.

Bernard Payet is a mental coach who has worked with athletes all over the world, including German golfer Hans Peter Porsche and US Olympic skier Tommy Ford.

Payet recently met with the principal secretary for sport, Ralph Jean-Louis, who organised a session for him to share his knowledge with coaches in Seychelles, an archipelago in the western Indian Ocean.

Mental coaching uses a psycho-educational model to develop the mental and psychological aspects of performance achievement.

"It is not only the physical side of training that helps an athlete to progress, but the athlete must be in good shape mentally as well," said Payet.

He added that coaches need to build their athletes' confidence for them to perform well.

"I have worked with many coaches and athletes over the years and one of the most important things I have noticed is that there needs to be a good relationship between athletes and coaches, where a relationship built on trust exists," said Payet.

He added that oftentimes, coaches are left behind when "we think of sports development, but that is something that must change, as they are the ones that are with the athletes all along and should they fail, then their athletes will also fail."

Payet, who lives in Austria and is in Seychelles on holiday with his wife and kids, was accompanied by one of the athletes he works with, Tommy Ford.

The US Olympic skier said owes a lot to Payet for all his achievements.

"My skiing career had become stale at one point, but then I met Payet and he really had a huge impact on me and we have been working together ever since, where I have won gold at the world championships and also competed at three Olympic Games," said Ford.

Attending the discussion was local volleyball coach Francois Magloire who said that it was very interesting for him personally as he has always believed that his players' mental state is very important.

"We often find that coaches tend to train players in physical, tactical and technical areas, but neglect the mental part of it, which is one the most important aspects of achieving success in any sport," said coach Magloire.

He added that a player can be very gifted technically, but if mentally there are things not going well, then the performance level will go down.

Magloire, who has had great success coaching the Anse Royale and Cascade women's volleyball teams as well as the Seychelles National team, added that more needs to be done to ensure that athletes are better prepared mentally especially if the country is to really produce good results.

Seychelles also has a certified mental coach, Maurice Denis, who said that the points in the discussions are not new to him, but he is happy that the coaches learned of this aspect of training.

"I do hope that the coaches can now see the importance of this aspect of sport as it is something I have been advocating for over the years," said Denis.

While Payet will be leaving Seychelles this weekend, Ford will be meeting some athletes next week, to talk about mental toughness in high-level sports.