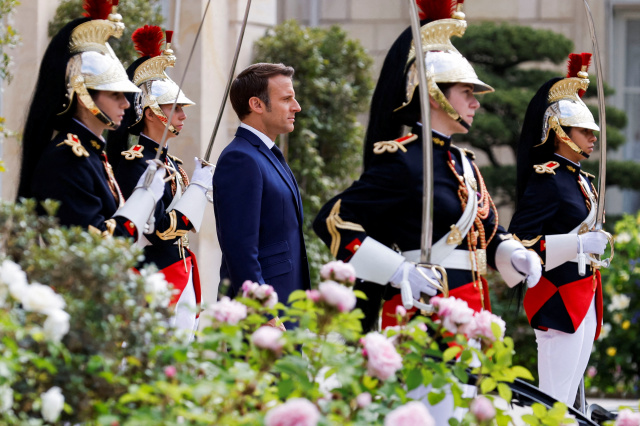 Macron stands as he reviews troops in the gardens of the Elysee presidential palace in Paris on May 7, 2022, after the investiture ceremony of Emmanuel Macron as French President, following his re-election last April 24. (GONZALO FUENTES / POOL / AFP)

(AFP) - French President Emmanuel Macron on Saturday vowed a new start to face immense challenges in foreign and domestic policy, as he was inaugurated for a second term after his election victory over the far right.

In a ceremony at the Elysee Palace, Macron was confirmed by Constitutional Council chief Laurent Fabius as the winner of April election and then signed the formal re-investiture document.

Attended by 450 people, including his wife Brigitte and his only surviving predecessors Francois Hollande and Nicolas Sarkozy, the ceremony was relatively modest but marked the first time a French leader is serving a second term in 20 years.

Macron faces a daunting agenda of implementing the reforms he vowed when he came to power as France's youngest-ever president in 2017, as well as dealing with the Russian assault against Ukraine.

"Rarely has our world and our country been confronted with such a combination of challenges," he said, referring to the Russian invasion, the pandemic and the ecological emergency.

He vowed to be a "new president" for a "new mandate" and create a "stronger France".

"Every day of the mandate that lies ahead I will have just one compass point. And that is to serve."

He also suggested a more inclusive and understanding style of ruling after his first term saw critics complain the former investment banker had abrasive and arrogant methods.

He vowed a "new method" to govern, far from the "worn-out rites and choreography" of the past.

In a tradition dating back to the Middle Ages, 21 cannon shots were fired from the Invalides military memorial complex to celebrate the inauguration.

With no drive down the Avenue des Champs-Elysees or long red carpet, the ceremony resembled the re-inaugurations of Francois Mitterrand in 1988 and Jacques Chirac in 2002, the last French president to win a second term.

Macron's second term will only start officially when the first one expires at midnight on May 13.

He is set to keep playing a leading role in efforts to stop Russia's war against Ukraine, while he carries an immense burden of expectation as a leader on the European stage with Germany still finding its footing in the post-Angela Merkel era.

Macron vowed to "act to avoid any escalation following the Russian aggression in Ukraine, to help democracy and courage to prevail, to build a new European peace and a new autonomy on our continent."

On the domestic front, Macron must deal with the crisis over the rising cost of living and also brace for possible protests when he finally tackles his cherished pension reform, raising France's retirement age.

He reaffirmed a vow for full employment in France and vowed to fight against inequality by reforming the health and school systems as well as against "daily insecurities and terrorism that is still there".

Attending the ceremony were the parents of teacher Samuel Paty who was beheaded by an Islamist extremist in 2020. His mother was moved to tears when the president embraced them.

Macron won the second round of presidential polls on April 24 with a score of 58.55 percent against far-right rival Marine Le Pen.

The ceremony comes at a time of political flux in the wake of Macron's election victory, as France gears up for legislative polls that swiftly follow in June.

Macron is expected to name a new premier in place of incumbent Jean Castex to lead a revamped government into the elections, but not until his second term officially kicks off.

He has mooted naming a female politician with a focus on social responsibility -- although reports have indicated that overtures to leftist figures, such as former official Veronique Bedague and Socialist parliamentary group chief Valerie Rabault, have been rebuffed.

Meanwhile, the Socialist Party along with the Greens and Communists, is forming an unprecedented alliance for the parliamentary elections with the hard left France Unbowed (LFI) party of Jean-Luc Melenchon.

He was by far the best performing left-wing candidate in the first round of presidential elections and is spearheading efforts to mount a convincing challenge to Macron.

Pro-Macron factions have regrouped under the banner of Ensemble (Together) while his own Republic on the Move party, which has struggled to create a grass-roots base, is renaming itself Renaissance.

Garrigues said the problems of the ruling party were "linked by nature to his (Macron's) political positioning which is both on the right and the left".

General » Be a reporter: Write and send your article » Subscribe for news alert
Tags: Franc, politics