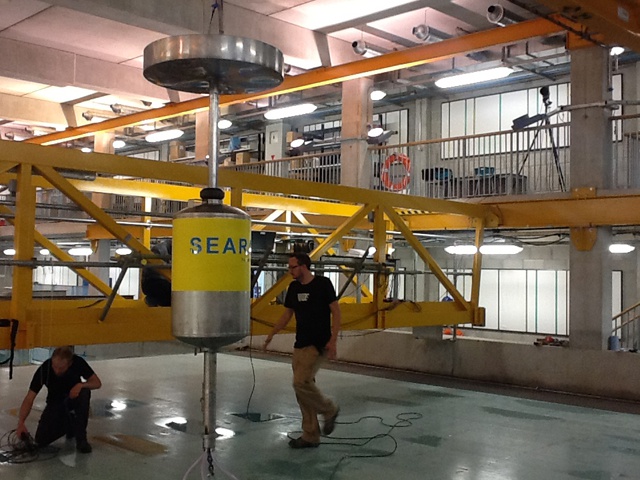 Researchers at Plymouth University test a 1:14 scale model of the Searaser unit at their state-of-the-art wave testing facility (Alvin Smith/Ecotricity)

(Seychelles News Agency) - When living on an island or in close proximity to the coast, one is always aware of the power of the ocean. Waves either lap lazily or pound angrily at the shoreline, but the sound of the ocean is always unmistakably present, day and night.

In less than two years, harvesting cheap and completely carbon-free renewable energy from the ocean waves may finally be within reach, as a British renewable energy company announced it has successfully completed the first stage of testing its new sea mill technology at a high-tech wave tank facility at Plymouth University.

Invented by Devon engineer Alvin Smith, the patented ‘Searaser’ harnesses the motion of ocean waves by pumping pressurised water up into high reservoirs and then back down into hydro-power turbines to create electricity on demand.

The Searaser uses such a simple concept that Ecotricity believes it will produce more electricity at a cheaper rate than any other wave-power technology, or indeed any other type of renewable energy on the market – including wind or solar energy – and unlike solar energy and wind, the ocean produces waves 24 hours a day, 7 days a week.

It could also be potentially cheaper than gas, coal or nuclear-produced electricity and with over a 20-year expected lifespan, the investment has potential to show big savings.

The Searaser consists of two large buoys – one on the surface of the water and another suspended under the surface and tethered to a weight on the seabed. The constant motion of the ocean waves moves the surface buoy up and down, driving the piston to pump large volumes of pressurised seawater uphill into reservoirs, where it then makes hydro-electricity without any external form of power.

Just one Searaser 1200 can pump 1.6 cubic metres of seawater in excess of 10 bars of pressure per second – which could produce a stunning 1MW of energy per day. This could power around 1,720 homes, and the inventor says that installing just 11,000 of the sea mills could provide reliable, cost-effective and eco-friendly energy to 20 million homes.

In 1997, Smith was in his swimming pool, playing with a ball. Noting how the ball came up to the surface with great speed after being held underwater, he idly wondered if power could be generated from this pent-up form of kinetic energy.

“I thought, if this ball could be weighted, you’d have energy both ways: you’d have buoyancy as the ball rises and when it’s forced back down under gravity you’d have the force of gravity, so we are using buoyancy and gravity,” he told news reporters at the launch event for the 'Inventing the 21st Century' exhibition at the British Library.

“If we connect that to a piston, we can pressurise water. Once you’ve pressurised water you can make it go uphill, and if you’ve got water at a height, you’ve got hydro, and that’s where it came from.”

In an email interview with SNA, Smith said he built his own working prototypes in 2006 in his home workshop.

“…now with Ecotricity as investors, we are working with DNV-GL of Bristol UK for the verification and certification of the SEARASER, but I personally attend all the testing to make sure it is done correctly,” he explained.

“Certification requires wave tank testing of the device connected to telemetry to record all data produced. We are very fortunate in having the wave tank facility at Plymouth University,” he said, adding that in the two years since the tank facility has been operation, he believes that Searaser is the most successful of all the products tested thus far.

Ecotricity, which is a renewable energy supplier utilising a combination of wind turbines, solar energy, green gas, now hopes to have a full-scale prototype installed in the ocean in the next 12 months, and plans to start producing electricity from the first commercial arrays within a few years. The company aims to manufacture the technology in Britain and transform the energy market not only locally but all around the world.

But Smith tells us that the fight to get governments in developed nations to support and adopt clean energy solutions – and stop protecting big coal, gas and nuclear power producers – is an uphill battle.

“I would love to see Searaser get the recognition it so deserves, if the general public were better informed we could persuade governments to use the Ecotricity Searaser device,” he said.

“I will keep trying, at 68 years of age my time is running out, so we must keep the world informed of these proven alternative energy sources. Governments, including our own UK government are ignoring us so far at their and the public’s peril.”

“The device works, there is endless energy in ocean motion, the trick is to be able to build a device strong enough to survive the storms at sea,” he said, adding that he and Ecotricity believe that together they have overcome this problem.

"We are not an inefficient ‘steam engine’ as is a nuclear, gas, or coal power station; we do not heat the water, so less energy is used,” he explained. “We pressurise clean sea water and return it to the sea as clean cold sea water.”

Indeed, the environmental impacts of the system seem minimal. There are no hydraulic oils as the cold sea water acts as a hydraulic fluid which supplies the energy directly to the green Pelton turbine-driven hydro-electric generator. Algae would enter the pump, but a filtration system would prevent anything larger from getting in.

Could it work for Seychelles?

The Indian Ocean archipelago of the Seychelles is almost completely dependent on fossil fuels which power large generators around the main inhabited islands of Mahé, Praslin and La Digue. Smaller islands with more tourist-based requirements, such as private island resorts, often have a combination of diesel generators and photovoltaic solar panels.

The cost of importing fuel to the remote small island state is high, meaning that energy prices, subsidised for residents for many years by the government, will rise significantly over the next five years to begin to reflect true market prices. This means the country’s policy-makers will have to seriously look at viable renewable energy sources to avoid the increasing cost of energy from causing rising inflation in a country where the cost of living is already prohibitively high.

The Seychelles does have a wind farm of eight turbines, donated by UAE-based energy company Masdar, which generate about 750kW each, which is equivalent to around 2.2% of Seychelles’ current electricity requirements and powers around 2,000 homes.

However, given that Seychelles is not situated in a particularly windy location, it seems that harnessing the power of the surrounding Indian Ocean may be more feasible and cost-effective.

According to Smith, the Searaser can work particularly effectively in conjunction with wind turbines, because in order to have electricity on demand, sea water needs to be pumped into a tall reservoir, situated either on a steep cliff next to the ocean or at the top of a man-made structure such as a wind turbine.

However, he warns that using wind turbines would be possible only under certain conditions.

“It would only be possible if offshore wind turbines could be built strong enough for a smallish header tank near the top of the column to regulate the flow through a hydro Pelton turbine situated above sea level in the column’s base,” he explained. The Searaser mills also require a minimum depth of 25 metres of water to operate.

The sea water can be pumped as high as 200 metres above sea level, and in order for the hydro-electric turbines to operate, a height of at least 10 to 15 metres, but the pressure generated by gravity is significantly lower at this height.

“The Searaser can pump via an accumulator directly at sea level to a Pelton turbine hydro generator at 20 bar pressure, but the disadvantage is that you have no stored energy as you have with the reservoir at a high head,” he added.