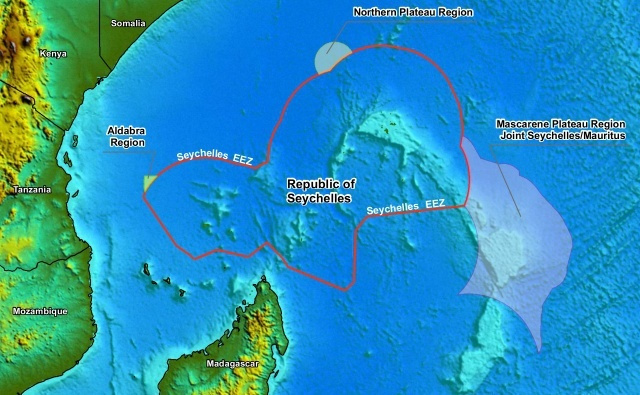 Seychelles and Mauritius have joint jurisdiction over an area of the seabed and its underlying sub-soil in the Mascarene Plateau Region. (Seychelles News Agency)

Seychelles and Mauritius have agreed to appoint a new multi-national company to survey its jointly managed Mascarene plateau area after the contract of the previous company was discontinued.

The decision was announced prior to the 22nd meeting of the Mauritius-Seychelles Joint Commission of the Extended Continental Shelf in the Mascarene in Seychelles' capital of Victoria on Tuesday.

Mauritian Ambassador Jagdish Koonjul said that the decision was taken as the original company "has been unable to provide us with the service we required."

He added that the joint commission was also "having difficulties finding companies to carry out scientific research work in the region, and the COVID-19 pandemic has played a role in delaying the work."

The Joint Management Area (JMA) is the mechanism of joint jurisdiction between Seychelles and Mauritius over an area of the seabed and its underlying sub-soil in the Mascarene Plateau Region. It excludes the water and living organisms above the shelf.

The Joint Management Area was set up after a treaty was signed in 2012 through which the two island nations secured rights to additional seabed covering over 400,000 square kilometres in the Indian Ocean.

The company previously selected was La Compagnie Générale de Géophysique (CGG) based and registered in France with branches in other regions of the world such as the United Kingdom and South Africa.

Koonjul explained that "carrying out a survey in that area is no small task, so we cannot expect the company to provide us with the data within a couple of months."

The ambassador said that "Over the last few days that we have been meeting, we have made significant progress. The commission is deciding to award the contract to a new company, which we hope will provide us with data quickly."

The project will be financed by the UNDP and there will be Seychellois scientists taking part in it.

On Seychelles' side, Philippe Michaud, special adviser in the Department of Blue Economy said that "we also discussed the possibility of Seychellois fishermen fishing for sea cucumbers in that area."

Michaud added that this is going to be a long journey, but it is one that is successful because it is very rare that two countries can agree on managing an area as big as this one.

Once the information is collected, Seychelles, an archipelago in the western Indian Ocean, and Mauritius, its neighbouring island state, will know how much hydrocarbons they have in their waters.

According to Koonjul, the renewed interest in finding oil in this region comes as a result of the conflict in Ukraine and the rising oil cost is creating a need for exploration in other areas.

Other topics of discussion were the monitoring and surveillance of the zones, "as the area is very far from Seychelles and Mauritius and there is certainly illegal fishing taking place there," explained Michaud.

The two parties will now decide how to patrol the zones better and prevent such activities from taking place.

The joint commission also discussed its strategic plans for the coming three years, which will allow the two countries to draft their roadmaps for the period of time.

At the end of the meeting, the delegates from both countries signed minutes of the points discussed so that they may review them in the future.

Seychelles and Mauritius agree on new terms for sustainable fishing