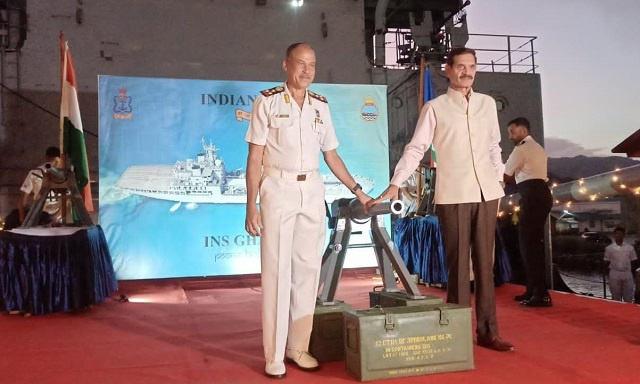 The announcement was made in a ceremony for the hand0ver of ceremonial guns and ammunition on Friday. (Indian High Commission)

(Seychelles News Agency) - India will be helping Seychelles with the installation of a coast guard radar system and other defence matters, the Indian High Commissioner said on Friday.

General Dalbir Singh Suhag, a former chief of army staff of the Indian Army, spoke of the donation of the radar system during a handing over ceremony of three ceremonial guns and ammunition and a wave-rider boat gifted by the Indian government.

The chief of the Seychelles Defence Forces (SDF), Michael Rosette, explained that the guns will be used in "special national events such as the National Day as well as provide a sense of gravitas and pride."

The ceremonial saluting guns with ammunition were gifted by the Indian government following a request from Seychelles' President Wavel Ramkalawan.

Seychelles, an archipelago in the western Indian Ocean, also received a wave-rider boat, the third addition to the two already in the fleet of the coast guard.

Seychellois personnel have been trained to use the newest addition of radar equipment to the Seychelles Coast Guard's fleet, which will help in the coastal surveillance of the island nation.

This surveillance system is not the first that India has donated to Seychelles. In 2015, Indian Prime Minister Narendra Modi visited Seychelles to launch the first Coastal Surveillance Radar station at Ma Josephine, a mountainous central region of the main island of Mahe.

Suhag said that India and Seychelles have a good relationship and "many common domains of concerns such as terrorism, and illegal and irregular fishing,"

Seychelles, an archipelago in the western Indian Ocean, has a longstanding cooperation with India in defence and security. This includes maritime security, anti-piracy operations, air surveillance, training and capacity building.