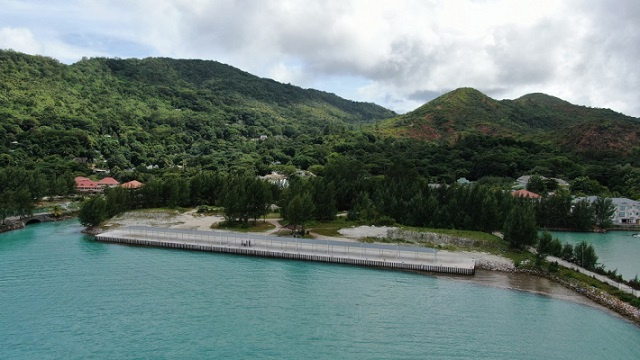 The first phase of the passenger terminal, which was the construction of a jetty, was completed in August 2020. (Seychelles Ports Authority)

Passengers travelling to and from Seychelles' Praslin Island by boat will have a new terminal on man-made Eve Island annex, adjacent to the current cargo terminal, by October, says a top government official.

The new terminal is expected to eliminate the congestion problem that is prevalent at the current passenger terminal and de-silting, which is necessary to ensure comfortable movement of vessels in the area.

A contract for the construction was signed recently by the chief executive of the Seychelles Ports Authority (SPA), Ronny Brutus and Nilesh Hirani on behalf of Harikrishna Builders construction company.

Brutus said that the development of Praslin has been dependent on connectivity with the main island and the port facilities have played a vital role in facilitating this.

"Over the years, there has been a remarkable increase in the level of service being offered by ferry operators and it is only fair that this is complemented by high level port infrastructure as well," he said.

Brutus added that as many of the people who travel to Praslin are doing so using increasingly sophisticated vessels, it is, therefore, natural for SPA to upgrade its facilities to match that of the boats.

Maritime connectivity between the islands is of high importance and Praslin, being the second most populated island of the archipelago, is a much visited island by both locals and visitors, he added.

"According to the latest statistics, more than 500,000 passengers travel between Mahe and Praslin each year and that shows the level of traffic between the two islands. This displays the importance of port facilities and the need to ensure that they are of high standards," he explained.

Eve Island is a reclaimed island off Baie Ste Anne on Praslin and covers an area of 0.29 square kilometres. The construction on the island is in the second phase of the project and is being financed by the SPA. The first phase of the passenger terminal, which was the construction of a jetty, was completed in August 2020.

The new passenger terminal is expected to cost SCR14.8 million ($1.1 million). It will also introduce a traffic management plan to address the current traffic congestion problems.

At the moment, visitors to Praslin are using the jetty found at Baie Ste Anne, if they are travelling by ferry, or the airport at Amitie, if travelling by plane.