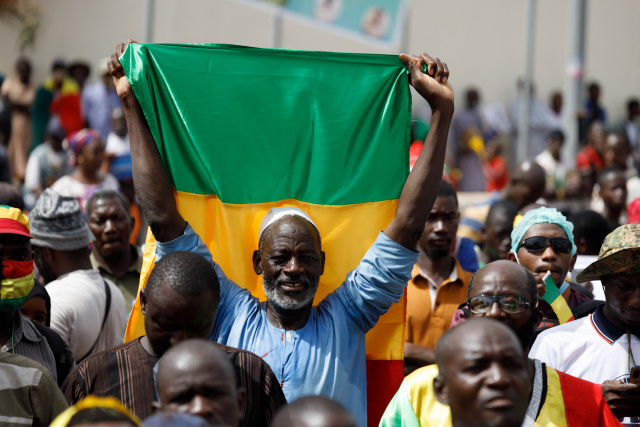 A supporter of Malian Interim President holds up the flag of Mali during a pro-Junta and pro-Russia rally in Bamako on May 13, 2022. Several hundred Malians have gathered in Bamako to support the junta, the army and military cooperation with the Russians, AFP journalists report. (OUSMANE MAKAVELI / AFP)

The statement read out on state television said a "small group of anti-progressive Malian officers and non-commissioned officers attempted a coup in the night of May 11 to 12, 2022".

"These soldiers were supported by a Western state. The attempt was thwarted thanks to the vigilance and professionalism of the defence and security forces."

The statement gave few details on what allegedly happened.

It mentioned arrests and said the detainees would be handed over to justice. Their identity and whereabouts were not revealed.

It added that checks have been strengthened around the capital Bamako and at Mali's borders.

A military source speaking on condition of anonymity spoke of around 10 arrests and said others were underway.

The government statement said "all necessary means" were being mobilised for the investigation and to find accomplices.

No indication of the attempted coup that reportedly happened last week had surfaced until Monday evening.

The West African state has been fighting a jihadist insurgency against groups affiliated with Al-Qaeda and the Islamic State group since 2012 in the north and centre of the country.

The fighting has also spread to neighbouring Niger and Burkina Faso.

The country's military-dominated government has broken with traditional partner France and forged closer ties with Russia in its battle against the jihadists.

It had pledged to return power to civilians by February 2022 but has since extended the timetable, incurring regional sanctions.