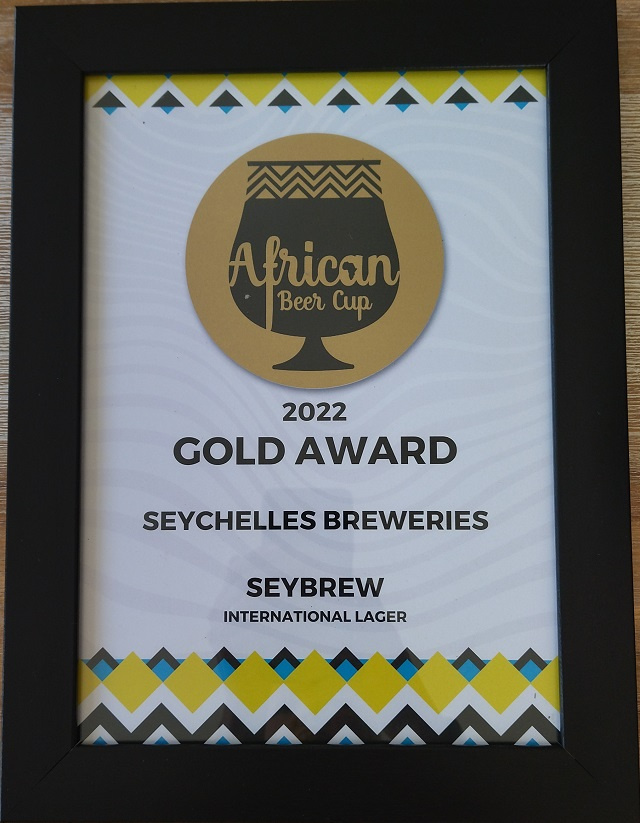 SeyBrew won a gold award in the International Lager category of the African Beer Cup among 28 entries. (Seychelles Breweries)

SeyBrew, the flagship brand of Seychelles Breweries, has won a gold award in the International Lager category of the African Beer Cup, the company said on Tuesday.

The iconic beer brand also clinched third overall in the competition for the title of Best Beer in Africa out of 251 beers by an expert panel during the competition held in Cape Town, South Africa, from May 9 -14.

The managing director of Seychelles Breweries, Conor Neiland, said that winning the Africa Beer Cup Award is a fantastic achievement for the SeyBrew team.

"It attests to the focus and efforts put in by the team to produce world class liquids consistently, while also helping us to pursue our export agenda. This is a proud moment for all the staff in Seychelles Breweries as we celebrate our 50th Year, and I thank everyone for playing their part" he said.

The SeyBrew beer is the first locally produced beer and has been on the market since 1972. It is considered the favourite beer of Seychelles, an archipelago in the western Indian Ocean. SeyBrew is brewed with the finest malt and hops imported from Europe, Australia, and South Africa.

There were 28 entries from 9 countries in the International Lager category from a mix of larger breweries and craft breweries across the African continent. SeyBrew came out first followed by Mosi Premium Lager from Zambian Breweries and Club Pilsener from Nile Breweries.

According to Lucy Corne, the co-founder and competition director of the African Beer Cup, this year's competition was very tough, with only 10 gold medals awarded across the competition.

"For a beer to win gold it needs to score above 40 and to beat the others in its category," she said.

SeyBrew received the joint highest score in the competition -- 42 out of 50 -- along with Arrowhead Vintage and Castle Double Malt.

The African Beer Cup is the largest beer competition on the continent and the only one welcoming entries from across Africa. The competition is open to licensed commercial breweries large and small and must have been brewed in Africa.