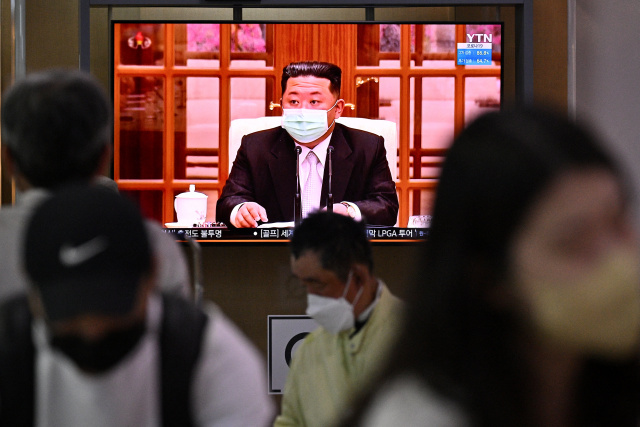 People sit near a screen showing a news broadcast at a train station in Seoul on May 12, 2022, of North Korea’s leader Kim Jong Un appearing in a face mask on television for the first time to order nationwide lockdowns after the North confirmed its first-ever Covid-19 cases. (Anthony WALLACE / AFP)

(AFP) - The UN voiced alarm Tuesday at the swelling Covid outbreak in North Korea, warning that its unvaccinated population was particularly vulnerable, and reiterated its offer to provide assistance and jabs.

The UN's World Health Organization cautioned that the highly contagious Omicron variant of Covid could easily rip through the impoverished country with disastrous effect.

And the UN rights office warned that the measures authorities are putting in place risked violating rights and pushing vulnerable people into an even more precarious situation.

A total of 56 deaths and nearly 1.5 million cases of "fever" have been reported in North Korea since the country announced its first Covid case a week ago, according to the official Korean Central News Agency.

"WHO is deeply concerned at the risk of further spread of Covid-19 in the country particularly because the population is unvaccinated and many have underlying conditions putting them at risk of severe disease and death," agency chief Tedros Adhanom Ghebreyesus told reporters.

"WHO has requested that the Democratic People's Republic of Korea share data and information," he said, adding that the organisation had offered to provide technical support and supplies, tests, medicines and vaccines to help Pyongyang stem the spread.

Leader Kim Jong Un has ordered nationwide lockdowns to try to slow the spread of the disease, and deployed the military after what he has called a botched response to the outbreak.

So far, it does not appear that the country has accepted the assistance offered by the United Nations.

WHO acknowledged though that there was no way force North Korea, or Eritrea -- the only other country in the world that has not started vaccinating its population against Covid -- to accept help.

But if Covid is allowed to spread unabated, there is a greater chance new and potentially more dangerous variants could emerge, putting the whole world at risk.

"Where you have unchecked transmission, there is always a higher risk of new variants emerging," WHO emergencies director Michael Ryan told reporters.

"So certainly it is worrying if countries... are not using the tools that are now available."

And while fears abound that more dangerous Covid variants could emerge, Maria Van Kerkhove, the WHO's technical lead on Covid-19, stressed that the dominant Omicron variant was dangerous.

"The notion that Omicron is mild is false... That narrative is really deadly, because people think that they're not at risk," she said.

For the unvaccinated, and especially the elderly or people with underlying conditions, Omicron can cause "severe disease and death," she said.

"This is why vaccines are so important."

Earlier Tuesday, the UN also cautioned that the measures introduced by Pyongyang to rein in the outbreak could lead to serious rights violations.

"The latest restrictions, which include putting people under strict isolation and imposing further travel restrictions, will have dire consequences for those already struggling to meet their basic needs," UN rights office spokeswoman Liz Throssell told reporters.

"We urge the... authorities to ensure that all measures adopted to tackle the pandemic are necessary, proportionate, non-discriminatory, time-bound and strictly in line with international human rights law," she said.

Throssell also reiterated a call for countries "to relax sanctions to enable urgent humanitarian and Covid-related assistance" to the impoverished country.

"We encourage the DPRK as a matter of urgency to discuss with the UN the opening of channels for humanitarian support, including medicines, vaccines, equipment and other life-saving support," Throssell said.