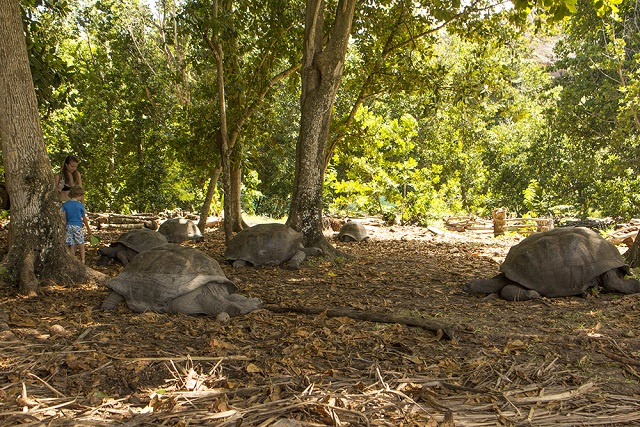 Curieuse is a small granitic island close to Praslin and is home to hundreds of giant tortoises. (Salifa Karapetyan)

(Seychelles News Agency) - Seychelles will get more international assistance in its research into bats and giant tortoises under a renewed agreement with the Green Teen Team Foundation (GTTF) and the Parco Natura Viva.

The agreement signed between the Seychelles Parks and Gardens Authority (SNPA) and the GTTF in 2017 was renewed on Wednesday.

The chief executive of the SNPA, Allen Cedras, said that “as they are specialists in management and scientific activities on land tortoises and bats, we will now have scientific support and advice at a higher level to continue the work we have already started.”

The authorities in Seychelles are carrying out a census to determine the current situation of the Seychelles sheath-tailed bat, an endemic species which is on the brink of extinction.

Sheath-tailed bats are found in the various national parks on Mahe, the main island, and Silhouette, the third largest island of the archipelago in the western Indian Ocean.

The giant tortoises found on Curieuse Island and in the Botanical Gardens in the capital Victoria are also part of conservation programmes where the species are nurtured until they are five years old and later released into the wild.

Curieuse is a small granitic island close to Praslin, the second most populated island, and is home to hundreds of giant tortoises, which were introduced between 1978 and 1982.

The signing of the agreement coincided with a one-week visit to Seychelles by Princess Theodora Von Liechtenstein, the founder of the GTTF.

With the additional help, more information on the species' eating habits and their movements will also be tracked.

"We also plan to carry out other studies on the species we deem appropriate, that we now have the support to do so," said Cedras.

As a result, students and scientists will be able to come to Seychelles and carry out their research, while the SPGA will benefit from the data collected, as well as become co-authors of scientific papers produced.

As part of the amendments discussed, instead of renewing the agreement every five years as was previously the case, this will be done every three years.