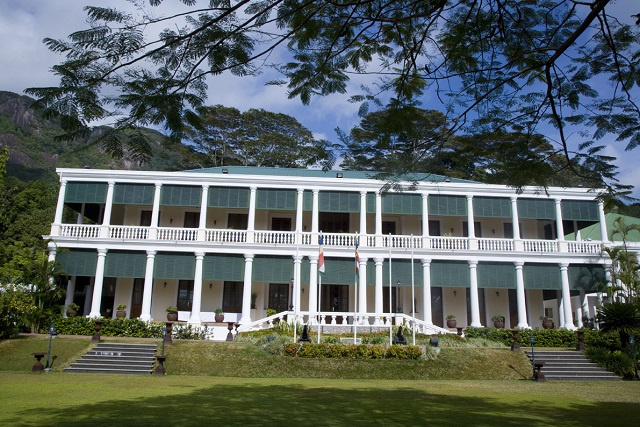 Visits to State House are being organised on a regular basis through the National History Museum. (Gerard Larose)

(Seychelles News Agency) - Visitors to Seychelles will be able to visit the building which houses the Office of the President as the State House, a historical monument built in 1910, as President Wavel Ramkalawan has decided to reopen its doors to the public.

Guided public tours and open days at the monument were first organised for a one-year period in 2011, when the centenary of the building's existence was celebrated and the tours were conducted by staff of the National Heritage Department.

Now, visits are being organised on a regular basis through the National History Museum located in Victoria, the capital, with the capacity to accommodate up to two groups of 15 people per guided tour, on Mondays and Wednesdays starting at 10 am.

In an interview with the Seychelles Broadcasting Corporation (SBC), Ramkalawan said that through a visit to State House, one will not only learn about the building but also about other historical sites on the property.

"We want people to know the place where the president has his office, where important decisions are taken. We want Seychellois to be able to visit it and not only see it on the television when an ambassador visits or for other occasions," said Ramkalawan.

He outlined that the fee that foreigners will be paying will go towards paying guides as well as for the upkeep of the garden.

"I ask everyone to use this opportunity and I take this opportunity to ask organisations to bring Seychellois here. As much as I can, when there is a group visiting, I will do my best to come and say good morning at least," said Ramkalawan.

In a tour guided visit to State House, visitors can see a garden full of colourful flowers and shrubs, the endemic coco de mer palms, and a pen with Aldabra Giant tortoises. The tour also includes the cemetery, which contains the tombs and graves of some notable historical figures in the history of Seychelles.

The most prominent grave is that of Chevalier Jean-Baptiste Queau de Quincy who was the Commandant and Civil Agent of Seychelles from 1793 to 1811 when Britain took possession of the islands.

The last person to be buried in the cemetery was late former President James Mancham, who passed away on January 8, 2017.

State House was formerly known as Government House during the years when Seychelles, an archipelago in the western Indian Ocean, was a British colony, and it was the seat of the British Governor who administered the islands at the time.

Paintings, books, and a football: Gifts to president of Seychelles in his third year go on display