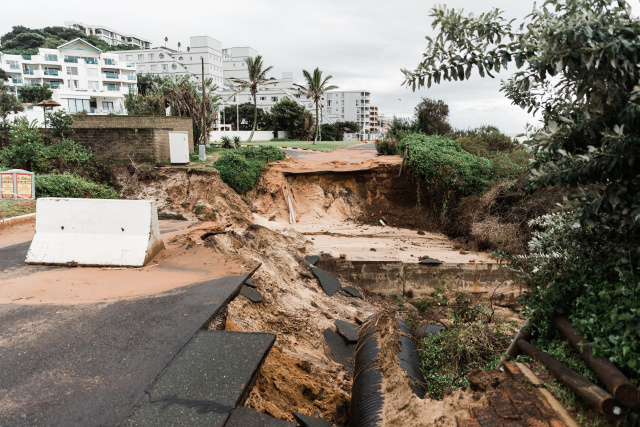 A general view of a severely damaged home and of the road infrastructure following heavy rains and winds in Umdloti north of Durban, on May 22, 2022. Floods, mudslides and rainstorms struck the South African port city of Durban and surrounding KwaZulu-Natal province. (RAJESH JANTILAL / AFP)

(AFP) - Heavy rains lashed South Africa, forcing hundreds of people to flee their homes on the east coast, officials said on Sunday, only a month after the worst floods in living memory killed more than 400.

No fatalities were immediately recorded but there was severe damage to some buildings, mainly in Durban, capital of KwaZulu-Natal (KZN) province.

"We are yet to receive a full comprehensive report on the impact of these latest heavy rains, but as reports come in a worrying picture is however emerging," KZN premier Sihle Zikalala said during a news conference.

The repairs continue after the storms caused damage worth hundreds of millions of dollars.

"Some areas are inaccessible and have become islands at this stage," Zikalala said.

Near the Umdloti beach resort north of Durban, parts of the road had been washed away, leaving gaping holes and cars balanced on the edge, an AFP journalist witnessed.

"The flooding started late yesterday afternoon but as a result of the collapse of this road we couldn't get out," one local resident, Kevin Govender, told AFP.

They were only able to get out once the emergency services arrived on Sunday.

Nearly 250 people were evacuated from the resort town overnight and rescue operations were continuing Sunday, as the emergency services received more calls for help. Some homes have lost power.

The water purification station for the eThekwini area around Durban has also been damaged, said officials.

The South African Weather Service put the alert level at the highest. Officials called on residents to stay at home.

The army has also been called in for reinforcement.

Around 3.9 million people live in Durban, and the Indian Ocean city hosts one of Africa's main ports.

The rains are expected to continue until Monday, according to forecasts.

South Africa is usually untouched by storms which regularly hit its neighbours like Mozambique and Madagascar.

General » Be a reporter: Write and send your article » Subscribe for news alert
Tags: SAfrica, flood