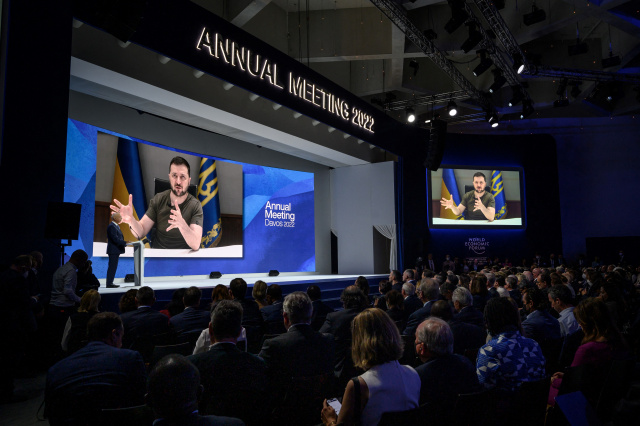 Ukrainian President Volodymyr Zelensky is seen on a giant screen during his address by video conference as part of the World Economic Forum (WEF) annual meeting in Davos on May 23, 2022. (Fabrice COFFRINI / AFP)

(AFP) - Ukrainian President Volodymyr Zelensky used the Davos summit on Monday to appeal for more weapons for his country and "maximum" sanctions against Moscow.

Speaking by videolink, Zelensky told the World Economic Forum that tens of thousands of lives would have been saved if Kyiv had received "100 percent of our needs at once back in February" when Russia invaded Ukraine.

"This is why Ukraine needs all the weapons that we ask (for), not just the ones that have been provided," said Zelensky, flanked by Ukrainian flags and wearing an olive green T-shirt.

Zelensky called for an oil embargo on Russia, punitive measures against all its banks and the shunning of its IT sector, adding that all foreign companies should leave the country.

"There should not be any trade with Russia," he told the gathering of the world's political and business elites.

"I believe there are still no such sanctions against Russia -- and there should be."

While the United States, Britain and Canada have moved to ban Russian oil and gas, the European Union has been divided over imposing similar measures. EU members such as Germany and Hungary are heavily dependent on energy supplies from Russia.

The war in Ukraine is dominating the discussions in Davos, the first WEF meeting in more than two years. The Covid pandemic forced the cancellation of the 2021 in-person event and the postponement of this year's confab until May.