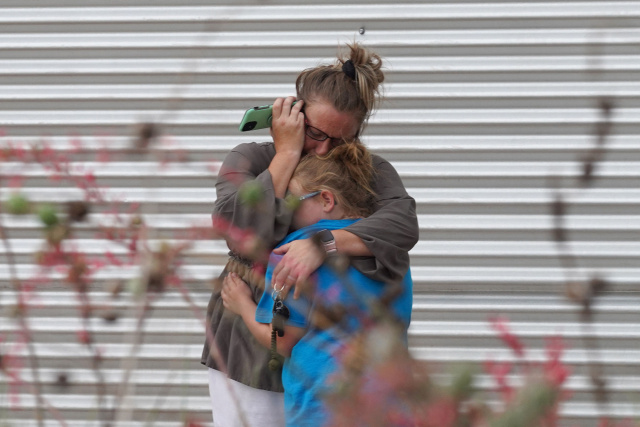 A woman cries and hugs a young girl while on the phone outside the Willie de Leon Civic Center where grief counseling will be offered in Uvalde, Texas, on May 24, 2022. A teenage gunman killed 18 young children in a shooting at an elementary school in Texas on Tuesday, in the deadliest US school shooting in years.
The attack in Uvalde, Texas -- a small community about an hour from the Mexican border -- is the latest in a spree of deadly shootings in America, where horror at the cycle of gun violence has failed to spur action to end it. (Allison dinner / AFP)

(AFP) - A mass shooting that left 19 schoolchildren dead in the deeply pro-gun state of Texas on Tuesday increased pressure on US politicians to take action over the ubiquity of firearms -- but also brought the grim expectation of little or no change.

It was the eighth mass shooting this year, according to the Everytown gun control group, and came 10 days after another 18-year-old murdered 10 African Americans at a supermarket in New York.

But nearly 10 years after a man slaughtered 20 children and six others in an attack on the Sandy Hook elementary school in Newtown, Connecticut, and four years after 17 were killed at a Florida high school, restrictions on gun purchases and ownership have not significantly changed.

"I had hoped, when I became president, I would not have to do this, again," a distraught President Joe Biden said as he led national mourning, vowing to overcome the US gun lobby and find a way to tighten gun ownership laws.

"Another massacre... an elementary school. Beautiful, innocent, second, third, fourth graders," he said. "I am sick and tired of it. We have to act. And don't tell me we can't have an impact on this carnage."

But guns of all kinds, especially high-powered assault rifles and semi-automatic pistols are cheaper and more widely available than ever across the United States.

And the all-too-familiar arguments over guns, public safety and rights re-opened immediately on the news of Tuesday's mass shooting.

The debate is set to intensify going into the weekend when Houston, Texas hosts the annual convention of the country's leading pro-gun lobby, the National Rifle Association.

Senator Chris Murphy, who represents Connecticut, made an emotional call on the Senate floor on Tuesday for lawmakers to take action.

"Nowhere else does that happen except here in the United States of America and it is a choice. It is our choice to let it continue," he said.

But Cruz quickly pushed back, saying people will use the shooting to attack the right of people under the US Constitution's 2nd Amendment to own guns.

"When there's a crime of this kind, it almost immediately gets politicized," Cruz said.

Attacking constitutional gun rights "is not effective in stopping these sort of crimes," he added.

Yet data shows the grim national cost of gun crime.

Last week, the Centers for Disease Control and Prevention said the number of gun deaths in the United States underwent a "historic" increase in 2020.

Mass shootings have also risen, according to Everytown.

The country is swamped with guns. US firearms makers produced more than 139 million guns for the commercial market over the two decades from 2000, and the country imported another 71 million.

That includes high-powered assault rifles, which can be found for $500, and 9 millimeter pistols that combine ease of use, high accuracy and semi-automatic triggers with prices as low as $200.

But at every incident, proposals by state and federal lawmakers to tighten laws are rebuffed by conservative colleagues, who count on voter support from a sizeable portion of the public opposed to gun control.

Politicians like Abbott have instead moved to ease controls. Last year, the Texas governor signed a law allowing anyone in the state over 18 to openly carry a handgun without a license or training.

Shannon Watts, the founder of Moms Demand, an activist arm of Everytown, pointed out that Texas is one of the country's largest gun markets and has a high firearms death rate.

"If more guns and fewer laws made Texas safer, it would be the safest state with declining rates of gun violence," Watts wrote on Twitter.

"But it has high rates of gun suicide and homicide, and is home to four of the 10 deadliest mass shootings."

General » Be a reporter: Write and send your article » Subscribe for news alert
Tags: US, crime, guns, politics