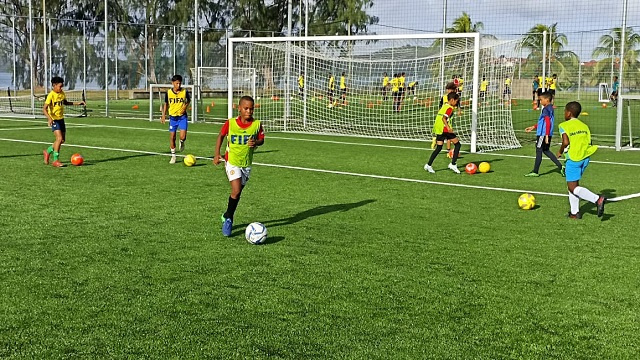 For Seychelles, the players were selected from the various football academies in the country. (Sedrick Nicette, Seychelles News Agency)

A group of 20 young and promising footballers from Seychelles left the country on Wednesday to compete in the Madewis Cup in France.

The Madewis Cup is a national football tournament bringing together more than 10,000 amateur players aged six to 12.

The grand final of the Madewis Cup will be played this year at the Matmut Atlantique stadium, the home stadium of the Girondins Bordeaux football club, with other academy players from French clubs such as Lille, Bastia and Brest represented.

The invitation to Seychelles, a group of 115 islands in the western Indian Ocean, came when the organisers of the tournament decided to invite teams from outside of France for the first time. The island nation of Mauritius has also been invited.

Participating teams will receive a complete pack for each player of the team so that they are equipped for the competition.

For Seychelles, the players were selected from the various football academies in the country, with coach Mario Pragassen heading the side going to France.

"We only made the selection last week, where we asked the academies to send their top players, while we also picked players who have performed well in our weekend grassroots programmes," said Pragassen.

He added that although the tournament is going to be tough, the team is happy to have been given the exposure and experience it will give the young players.

"The biggest problem for Seychelles though is commitment. The young players and their parents need to show more commitment to their sport in order to move to a higher level," Pragassen added.

The two Seychelles teams will play in the under 10 and under 12 categories. They are expected to play at least five 8-aside matches and will be mentored by a number of professional players based in France.

Some of the professional players involved in the Madewis Cup in the past include Lyon midfielder Houssem Aouar, Chelsea goalkeeper Edouard Mendy and Manchester City defender Aymeric Laporte.

The young Seychelles players met for training earlier this week and it was clear that the kids are very enthusiastic.

"I am happy to be going to France and I hope I play well there and that our team can win," said Shaquil Benoit, a student from La Rosiere school.

Nirahj Payet on his part said, "training is fun and I am looking forward to going to France with the team as I like playing football with the other kids."

Abraham Prosper was also very optimistic about the tournament, saying, "I am very happy to be going there and I hope that I do well and be signed by a team there."

Sport » Be a reporter: Write and send your article » Subscribe for news alert
Tags: Madewis Cup