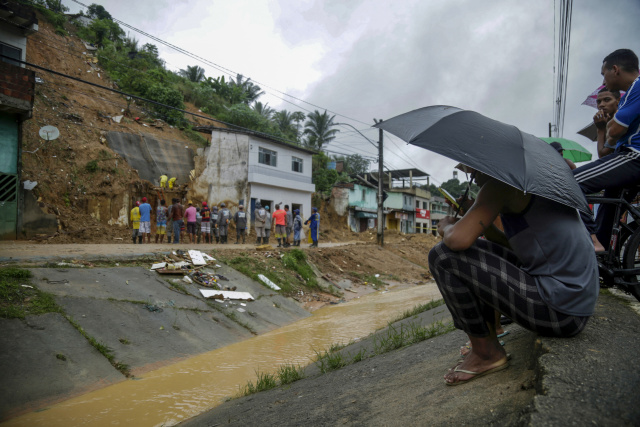 Residents stare at a landslide area at the community Jardim Monte Verde, Ibura neighbourhood, in Recife, Pernambuco State, Brazil, on May 29, 2022. Torrential rains in northeastern Brazil have left at least 56 people dead and dozens missing, civil defense officials said Sunday, as rescuers capitalized on a lull in downpours to search for survivors. (Brenda Alcantara / AFP)

(AFP) - Torrential rains in northeastern Brazil have left at least 79 people dead and dozens missing, civil defense officials said Sunday, as rescuers capitalized on a lull in downpours to search for survivors.

"As of 6:00 pm (2100 GMT) this Sunday, the number of people killed as a result of the rains has reached 79," the civil defense authority of Pernambuco state, where the affected communities of Recife and Olinda are located, said in a statement.

The disaster is the latest in a recent series of deadly landslides and floods triggered by extreme weather in Brazil.

The number of dead has mounted steadily over the weekend, including dozens in landslides, as heavy rains caused rivers to overflow and torrents of mud swept away everything in their path.

The latest statement from the civil defense did not offer an update on the number of people missing, though the agency had earlier reported 56 people still unaccounted for and nearly 4,000 who had lost their homes.

"We still don't have an exact number, but there are still reports of victims... who have not been found," Pernambuco Governor Paulo Camara said during a press conference.

"The search will continue until we can identify all the missing people," he said.

Authorities warned that rain was forecast to continue Monday, but in the meantime while the storm subsided some 1,200 personnel -- some in boats or helicopters -- resumed search and rescue work, state officials said.

"Although it has stopped raining now, we are forecasting heavy rains for the next few days," he said.

"So the first thing is to maintain self-protection measures."

Between Friday night and Saturday morning, rainfall volume reached 70 percent of what was forecast for all of May in some parts of Recife.

Images circulated on local media showed rescue workers and volunteers clearing heaps of debris in Jardim Monteverde, on the border between Recife and the municipality of Jaboatao dos Guararapes, where 19 died Saturday morning in a landslide that ripped through precariously built homes.

Luiz Estevao Aguiar, who lives in a different municipality, lost 11 relatives in the disaster, he told TV Globo.

"My sister, my brother-in-law, 11 people from my family died. It was difficult... I did not expect this," he said tearfully.

Nearby, Flavio Jose da Silva has been desperately looking for his stepfather Gilvan in the rubble of what was once his house.

Shortly after it collapsed, he heard Gilvan say, "I'm here, under the ground."

"We hope to find him alive," an emotional da Silva said, pointing to a mountain of debris.

Brazilian President Jair Bolsonaro said Sunday he would travel to Recife on Monday.

Over the past year, hundreds of Brazilians have died in flooding and landslides brought on by torrential downpours.

In February, more than 230 people were killed in the city of Petropolis, the Brazilian then-empire's 19th-century summer capital, in Rio de Janeiro state.

Early last month 14 more were killed by flooding and landslides in the state.

Experts say Brazil's rainy-season downpours are being augmented by La Nina -- the cyclical cooling of the Pacific Ocean -- and by climate change.

Because a hotter atmosphere holds more water, global warming increases the risk and intensity of flooding from extreme rainfall.

Risks from heavy rains are augmented by topography and poor construction in shantytowns built in steep areas.

According to meteorologist Estael Sias of the MetSul agency, the heavy rains lashing Pernambuco and, to a lesser extent, four other northeastern states, are the product of a typical seasonal phenomenon called "eastern waves."

He explained that those are areas of atmospheric disturbance that move from Africa to Brazil's northeastern coastal region.

"In other areas of the Atlantic this instability forms hurricanes, but in northeastern Brazil it has the potential for a lot of rain and even thunderstorms," he said.