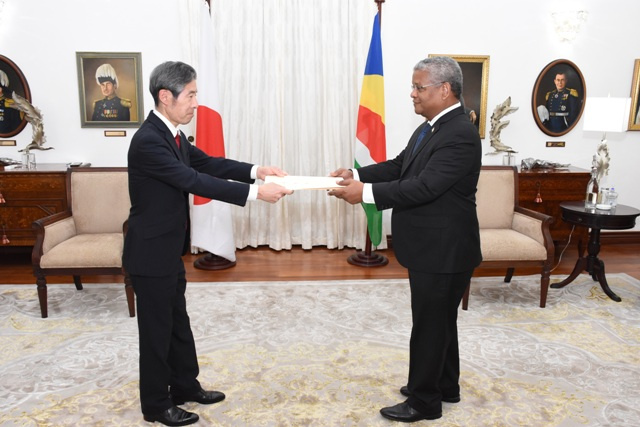 Japan is expected to provide vessels to the Seychelles marine police as part of bilateral cooperation agreement between the two countries, the newly accredited Japanese ambassador said on Tuesday.

"We have already signed the agreement to provide the maritime police with vessels and also the building," Ken Okinawa told reporters after presenting his credentials to Seychelles' President Wavel Ramkalawan at State House.

Seychelles and Japan have had diplomatic relations since the island nation got its independence from the British in 1976.

Okinawa said, "we will continue to support Seychelles on maritime safety and climate change."

Japan has assisted Seychelles, an archipelago in the western Indian Ocean, with several other projects especially in the fisheries sector, the second top contributor to the island nation's economy.

The government of Japan financed the construction of additional facilities to cater to increased artisanal and semi-industrial fishing activities through the Japan International Cooperation Agency (JICA) with a grant of around $12 million. The Providence Artisanal Fisheries Facilities were inaugurated in September 2018.

Japan also assisted Seychelles in setting up a school for children with hearing impairment in April last year. This was done through a Japanese grant of $76,000 (SCR1 million) for grassroots human security projects.

Okinawa is replacing Makoto Tominaga, who paid his farewell visit to the President in March after completing a tenure of over three years.

The Japanese ambassador to Seychelles is based in Nairobi, Kenya.