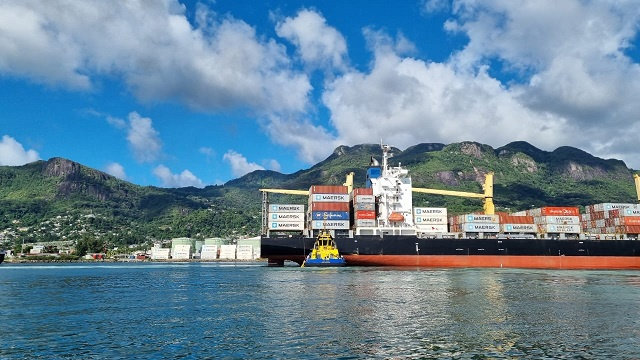 Work on the expansion of Port Victoria is expected to begin soon to turn it into a modern international multi-purpose commercial port. (Salifa Karapetyan, Seychelles News Agency)

The various European lenders involved in the project to expand Seychelles' Port Victoria, were updated on its progress in a meeting with senior officials of the Seychelles Ports Authority (SPA) and the Ministry of Transport on Tuesday.

The main lenders in the expansion project are the European Investment Bank (EIB), the Agence Francaise de Developpement (AFD) and the European Union (EU).

The SPA has received $41 million already -- $35 million from the AFD and the EIB --  while the EU has provided a grant of around $6 million.

After a six-year delay, work on the expansion of Port Victoria is expected to begin soon to turn it into a modern international multi-purpose commercial port. The project has two major components - the construction of a quay wall and cargo terminal and the dredging of the harbour to accommodate vessels with drafts up to 14 metres.

Raoul Pedrazzani, deputy advisor from the EIB, told reporters that the project is still at its starting point, but he is confident it will be completed by 2024.

"This is just the first meeting, but we will know more by the end of the week. We know that there have been some delays and complications, but we are confident that Seychelles will have its extended port by the end of 2024," said Pedrazzini.

He said that the discussions included the costing and budget, the port's layout and design where they discussed ways to improve it and ensure its completion.

Future of the Victoria Lighthouse, a national monument, under discussion

The director for Mauritius and Seychelles at the AFD, Andre Pouilles-Duplais, said, "One of the main points we discussed was in relation to the [Victoria] Lighthouse at the entrance to the port, which is a historical monument. We will need to have discussions on the best way to go ahead and see if can be moved or even demolished."

The Victoria Lighthouse, which dates back to 1877, was declared a national monument in 2011 and is protected under law. Under the existing port expansion plan, it is supposed to be demolished in order to allow the dredging for the port to take place, according to a statement made by the SPA in April.

Tony Mathiot, a Seychellois historian and former chairperson of the board of the Seychelles Heritage Foundation, told SNA, "I would prefer to see the Lighthouse preserved in an enclosure but then how do we preserve it? I am sad that another one of our national monuments will be lost. We have lost so many of those monuments already and a lot of our history is being erased. But as it is I will not lose sleep over it because we have already lost a lot and the Victoria I once knew is no more."

Adjustments to original port plan being made

Meanwhile, the EU representative, Milko Van Gool, said that the project is a highly technical one and is also financially complicated.

"This is only one instance where you can see how strong the partnership between Seychelles and the EU is and I think our work on the port is a big expression of that very good relationship," Van Gool added.

Phillipa Samson, the project manager, said that in the discussions, they also talked about the adjustments made to the original plan, where the port was to be expanded outward by 40m, but now it has been changed to 10m.

The delegations are expected to have more details on the project during the week, with site visits and other meetings scheduled.

The Port of Victoria of Seychelles, an archipelago in the western Indian Ocean, is the only port that handles the import and export of goods for the country.