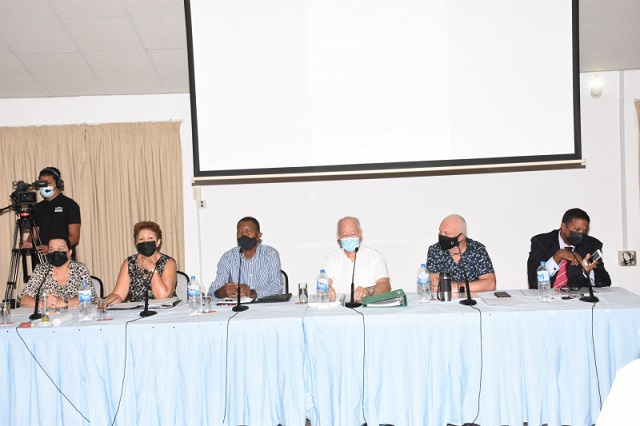 The committee chaired by Barry Laine (3rd from right) was set up in April with six members to represent over 100 victims. (Seychelles Nation)

Reparations for the victims of human rights violations, which took place in Seychelles after the 1977 coup d'état until recent history, should be funded by the government, according to a newly set up Victims Committee of the Truth, Reconciliation, and National Unity Commission (TRNUC).

The committee, which was set up in April with six members to represent over 100 victims, has proposed monetary reparations that vary from SCR 1 million ($78,000), plus a sum for the current value - when it comes to loss of property or business and forceful evictions - to a SCR 20 million ($1.6 million) settlement plus SCR 15,000 ($1200) per month for unlawful killing and enforced disappearance.

Reparations were calculated based on the salary a person would be getting whilst working in Seychelles from age 18 to 55.

The committee, which was set up in April with six members to represent over 100 victims, handed a progress report in May to President Wavel Ramkalawan, the speaker of the National Assembly, Roger Mancienne and the Chief Justice of the Supreme Court, Ronny Govinden - the heads of the three branches of the state.

The report outlines the current situation and suggestions for the way forward to compensate the victims.

Where will the money for the reparations come from?

The report says that the current president, Wavel Ramkalawan, and government ministers knew before they accepted office that the debt of the reparations had to be met.

"At the end of the day it does matter where we get the money, the debt is owed and has to be paid by the government," said Barry Laine, the chairperson of the committee.

In addressing where the funds for reparation payment are to be obtained, the 30-page-long report lists options such as the "repatriation of stolen money currently lying in off-shore bank accounts, repossessing and selling ill-gotten lands and properties distributed by the one-party state of SPUP/SPPF/Parti Lepep and selling off some islands on a 99-year lease."

The sale of the Seychelles Broadcasting Corporation (SBC), the Seychelles Nation newspaper, Nouvobanq shares, shares in Seychelles' oil fields - which are yet to be found and exploited - and obtaining a loan from the World Bank or the IMF were also suggestions for financing that are listed in the report.

The report also states that in a meeting held on April 27, all victims unanimously agreed on the creation of the Victims Trust Fund to receive funds and facilitate the reparation process.

The TRNUC was set up in 2018 and with its mandate coming to an end in August 2022, the report further suggests that the commission be renamed the '1977 Reparatory Authority' and have its mandate changed.

"The members of the authority would get involved in the implementation, consolatory, reparatory, and sometimes honorarium and quietus activities. This must be instigated as soon as possible before the end of June 2022 to ensure a smooth continuation of the process as explained earlier," said the report.

Sign of new times: Street names recalling coup in Seychelles' to be changed