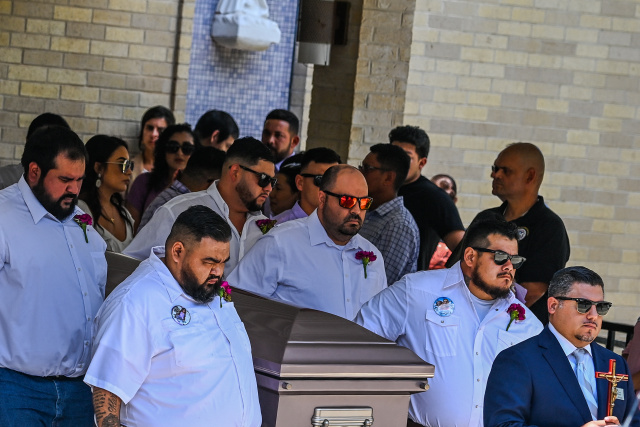 Pallbearers carry the casket of Amerie Jo Garza, who died in the mass shooting at Robb Elementary School, during her funeral mass at Sacred Heart Catholic Church in Uvalde, Texas, on May 31, 2022. (CHANDAN KHANNA / AFP)

(AFP) - The traumatized Texas town of Uvalde began on Tuesday laying to rest the 19 young children killed in an elementary school shooting that left the small, tight-knit community united in grief and anger.

The body of Amerie Jo Garza, 10, arrived in a silver coffin and was carried into Sacred Heart Catholic Church by six pallbearers wearing white shirts with red carnations.

Mourners, some of them dressed in the purple color of Robb Elementary School across the street, gathered outside the church ahead of the funeral amid a strong police presence.

Another girl, Maite Yuleana Rodriguez, also 10, was due to be laid to rest later Tuesday, with further ceremonies scheduled through the coming weeks.

A funeral for one of the two teachers killed, 48-year-old Irma Linda Garcia, will take place Wednesday, according to a local CBS News affiliate.

As the community mourned, anger has seethed over the response of police.

Officers have come under intense criticism since the May 24 tragedy over why it took well over an hour to neutralize the gunman -- the "wrong decision," Texas Department of Public Safety (DPS) director Steven McCraw has admitted.

ABC news on Tuesday cited multiple law enforcement sources saying that the Uvalde police department and school district had stopped cooperating with the DPS's investigation into the handling of the attack.

The great-grandfather of one of the young victims berated police near the memorial of white crosses surrounded by wreaths and bouquets of flowers.

"They could tell me 'Oh, we made a mistake. We made the wrong decision'. But my great-granddaughter is not coming back to me," said a distraught 78-year-old Ruben Mata Montemayor.

When President Joe Biden visited the town, about an hour's drive from the Mexico border, over the weekend, shouts of "do something!" rang out from the crowd.

The shooting -- the latest in an epidemic of gun violence in the United States that came less than two weeks after 10 people died in an attack at a Buffalo grocery store by a young gunman targeting African Americans -- has spurred desperate calls for gun reform.

"There's no words to describe (it)," said Esther Rubio, who traveled from nearby San Antonio to attend the wake on Monday for Amerie Jo.

Her pictures decorated the funeral home close to the school, where an 18-year-old gunned down 19 children and two teachers before he was killed by police.

Actor Matthew McConaughey, who grew up in Uvalde and has flirted with the idea of running for Texas governor, also visited the memorial Tuesday.

Biden on Monday vowed to "continue to push" for reform, saying, "I think things have gotten so bad that everybody is getting more rational about it."

Some key lawmakers have also voiced cautious optimism and a bipartisan group of lawmakers worked through the weekend to pursue possible areas of compromise.

They reportedly were focusing on laws to raise the age for gun purchases or to allow police to remove guns from people deemed at risk -- but not on an outright ban on high-powered rifles like the weapon used in both Uvalde and Buffalo, New York.

With the country still reeling over the Uvalde massacre -- the deadliest school attack since 20 children and six staff were killed in Newtown, Connecticut in 2012 -- US media reported the country was hit by a dozen more mass shootings over the three-day Memorial Day weekend.

At least 132 gun deaths and 329 injuries were recorded nationwide from Saturday to Monday evening, according to the Gun Violence Archive website.

"At the end of the day, if this child cannot even sip a glass of wine because he's too young, then guess what? He's too young to purchase a firearm," said Pamela Ellis, who traveled from Houston to pay her respects.

General » Be a reporter: Write and send your article » Subscribe for news alert
Tags: US, School, crime, Texas