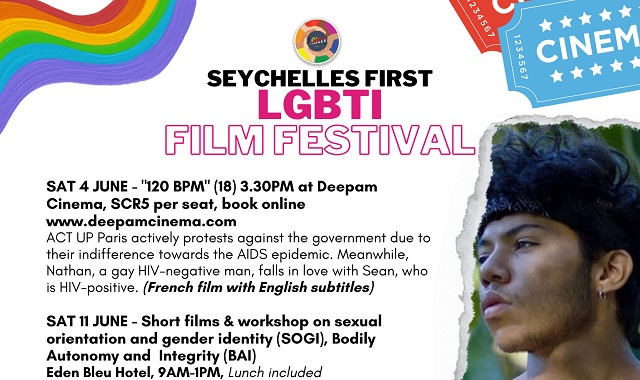 The festival was launched at a ceremony on June 1 at Résidence de France. (LGBTI Seychelles)

(Seychelles News Agency) - LGBTI Seychelles has launched the first LGBTI film festival of the island nation, where short and feature films will be screened to mark the beginning of Pride month, the month of June, when the LGBTI (Lesbian, Gay, Bisexual, Transexual, Intersex) communities around the world come together to celebrate their sexual identity and freedom to be themselves.

The festival was launched at a ceremony on June 1 at Résidence de France,  the residence of the French Ambassador to Seychelles, Dominique Mas.

The chairperson of the non-government organisation that advocates for sexual orientation and gender identity rights in Seychelles, Naddy Vidot, said that "by making this an annual event, we not only want to create a safe space of inclusivity for those around us but also to the LGBTI community around the world that want to visit Seychelles."

"Let us show those who have reservations about coming to Seychelles that Seychelles is a safe and welcoming space for LGBTI persons. Let us make sure that this is true not only for tourists but also for those of us who live here. It is with the hope that we can be recognised around the world as an LGBTI-friendly nation, where we can all love and be loved without legal or social barriers," said Vidot.

In 2016, consensual same-sex relationships were decriminalised and the law revised in 2021 when the latest Civil Code came into force. Although the old sodomy law had been in place since the time of the British colonial administration, it had not been used against same-sex couples in recent history.

In 2022, the association is working on developing hate crime legislation that will include but is not limited to legal protections irrespective of a person's gender or sexual orientation.

"There is still a way to go, there are still many issues to address. Equality means more than passing laws. The struggle is really won in the hearts and minds of the people in our country. A true testament of equality is when all LGBTI persons in this country can be proud to be ourselves, without fear of repercussions," said Vidot.

Furthermore, Ambassador Dominique Mas said that France stands firmly alongside the Seychelles LGBTI community and pays tribute to the authorities for the decriminalisation of same-sex relationships and for the current efforts in favour of an anti-hate law.

"Seychelles is once again leading the way for the African continent in terms of human rights," he said.

During four weeks, people in Seychelles will have the opportunity to view short or feature films, offering a wide choice of themes addressed by French, Namibian, British and American filmmakers. This will take place at different locations, including the main cinema in the capital Victoria, Deepam Cinema, and two other tourism establishments on Mahe Island.

Opening the festival on June 4 is a French feature film called "120 battements par minute" ("120 beats per minute"), which received the Grand Prix of the jury at the Cannes film festival in 2017 and a César for the best film in 2018.

Mas said "this film is an encouragement to the struggle for the recognition of the rights of sexual minorities. It echoes the battles waged in France and around the world for access to health and in particular treatment for HIV-AIDS. It tells us that human rights, whatever they may be, have to be conquered through collective will and mobilisation. Nothing is given for free, only the strength of collective action allows rights and freedoms to be improved."