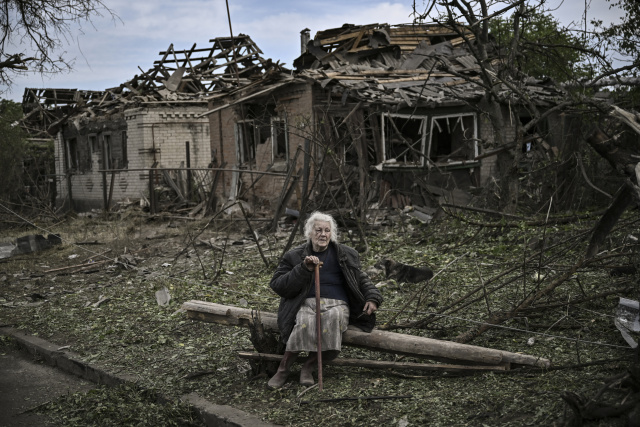 An eldery woman sits in front of destroyed houses after a missile strike, which killed an old woman, in the city of Druzhkivka (also written Druzhkovka) in the eastern Ukrainian region of Donbas on June 5, 2022. (ARIS MESSINIS / AFP)

(AFP) - With a see-saw battle for control of the strategically important city of Severodonetsk raging on, a senior Ukrainian official said Sunday that his country's forces now control "half of the city".

The gains, announced by regional governor Sergiy Gaiday, would represent a significant advance by Ukrainian troops, who earlier had appeared on the verge of being driven out of the large eastern city.

His comment came hours after several explosions rocked Kyiv, the first attack on the Ukrainian capital in weeks, and they followed a recent US promise to supply Ukraine with more potent missile systems.

Thousands of civilians have been killed and millions forced to flee their homes since Putin ordered Russian troops into Ukraine on February 24.

Fighting since April has been concentrated in the east of the country, where Russian forces have been making slow but steady advances after being beaten back from other parts of the country, including Kyiv.

Severodonetsk -- the largest city still in Ukrainian hands in the Lugansk region of the Donbas region -- has been a focal point in recent weeks.

Russia's army had claimed Saturday some Ukrainian military units were withdrawing from Severodonetsk, but mayor Oleksandr Striuk said Ukrainian forces were fighting to retake the city.

On Telegram Sunday, Gaiday said: "The Russians were in control of about 70 percent of the city, but have been forced back over the past two days.

"They are afraid to move freely around the city."

Gaiday warned, however, that a major new Russian push on Severodonetsk appeared imminent.

He said Russian forces had been tasked with gaining control of the city by Friday, as well as a key transport artery nearby.

"We expect in the near future that all the reserves that they now have access to... they will throw to perform these two tasks," Gaiday said, predicting "a large increase" in shelling by the Russian side.

Across a river in the neighbouring city of Lysychansk, pensioner Oleksandr Lyakhovets said he had just enough time to save his cat before the flames engulfed his flat after it was hit by a Russian missile.

On Sunday, the press service of the Ukrainian president's office reported nine civilians killed in the Donetsk and Lugansk regions from shelling.

- 'They are bombing everything' -

Ukraine has asked supporting countries for ever more powerful arms to fend off the Russian attack, and its deputy defence minister stressed Sunday this support was needed until Moscow was defeated.

"We have already entered into a protracted war and we will need constant support," Ganna Malyar told local media.

"The West must understand that its help cannot be a one-time thing, but something that continues until our victory."

The United States last week said it would supply Ukraine with advanced missile systems, the latest in a long list of weaponry sent or pledged for the pro-Western country.

But Putin said long-range missile supplies being sent to Ukraine meant that "we will draw the appropriate conclusions and use our arms... to strike targets we haven't hit before".

He did not specify which targets he meant, but earlier on Sunday Ukrainian officials said Russian missiles hit railway infrastructure sites in the first such strikes on Kyiv since April 28.

One person was wounded, and AFP reporters saw several buildings with blown-out windows near one of the sites that was targeted.

Leonid, a 63-year-old resident who used to work at the facility, said he heard three or four explosions.

"There is nothing military there but they are bombing everything," he said.

"People are afraid now," he said, walking back to his damaged home with two loaves of bread.

Western powers have imposed increasingly stringent sanctions on Russia but divisions have emerged on how to act, particularly on whether to engage in dialogue with Russia or not.

Speaking from the apostolic palace in St Peter's Square, Pope Francis on Sunday renewed calls for "real negotiations" to end what he called the "increasingly dangerous escalation" of the war.

Apart from the human toll, the conflict has caused widespread damage to Ukraine's cultural heritage.

Russian troops now occupy a fifth of Ukraine's territory, according to Kyiv, and Moscow has imposed a blockade on its Black Sea ports, sparking fears of a global food crisis. Ukraine and Russia are among the top wheat exporters in the world.

The United Nations said it was leading intense negotiations with Russia to allow Ukraine's grain harvest to leave the country.

Away from the battlefield, Wales dashed Ukraine's dreams of reaching its first football World Cup since 2006 with a 1-0 victory.

Before the game in Cardiff City Stadium Sunday, the Ukrainian national anthem was applauded by all sides.