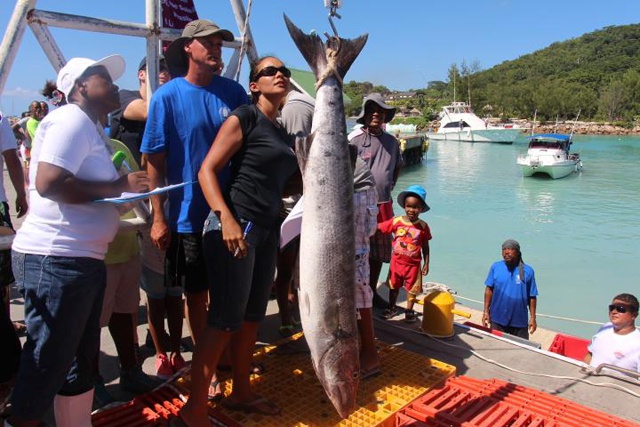 A total of 6.2 tonnes of fish was caught in the 11th La Digue Offshore Fishing Tournament. (SSFC)

Altogether 24 boats departed the jetty on the Seychelles third most populated island of La Digue on Friday October 24 returning 24 hours later with over 30 species of fish caught more than the targeted 24 individual species.

According to the organisers of the fishing tournament, the Seychelles Sports Fishing Club (SSFC) an all-time record of 6.2 tonnes of fish were caught almost doubling last year’s total catch of 3.2 tonnes.

A 164.5 Marlin landed by Team Dalon was the heaviest fish caught in this year’s La Digue tournament.

“The fishing conditions were very good and many boats had a wide variety of caught species which shows Seychelles fishing grounds remain healthy but need monitoring,” the SSFC’s Secretary Grant Heyer told SNA.

The La Digue Offshore Fishing Tournament was also an opportunity for the anglers to support Marine Conservation Society Seychelles (MCSS) in reporting whale and dolphin spotting, locations and species.

Team Kuki was the only one that reported the sighting of 2 jumping dolphins at Denis Island which lies some 95 kilometres north of mainland Mahé.

SSFC says the support to MCSS was not only during the La Digue competition but will apply throughout the year - every day anyone is fishing, with the aim of collecting data to help the Marine Spatial Planning Initiative data assessment in the long run.

All fish caught during the La Digue Offshore Fishing Tournament was bought by Oceana Fisheries a local fish processing company based on mainland Mahé.

As is the case for the past 10 tournaments money raised is used to fund a charitable project on La Digue and SSFC says this year the beneficiaries are the island’s Logan Hospital and athletics club.

The end of the year 2014 is fast approaching only one competition remains on the calendar of sports fishing in Seychelles. The first ever Seychelles – International Game Fish Association (IGFA) Great Marlin Race will be held on November 29 in conjunction with the Big Game Classic fishing tournament.

The IGFA Great Marlin Race (IGMR) is a partnership between the International Game Fishing Association (IGFA) and California’s Stanford University. It is aimed at getting anglers to combine recreational fishing with science particularly to learn about the basic biology of marlin and how they utilize the open ocean habitat.

The Big Game Classic fishing tournament will be a trolling event starting at 3.00am local time with a deadline for anglers to be back at 5.00pm the same day.

“Preparations are ongoing and the expectation is to have multiple marlin tagged with satellite tags and then see the stories the marlin tell us about their lives after capture,” Heyer told SNA.

According the IGFA website the tag travels the farthest from its point of deployment will win the race for that event. The tag from either of the participating countries that travels farthest of all in the 2014-2015 race year will be crowned the overall winner for the year when the result is announced in October 2015.

SSFC is viewing Seychelles participation in the IGFA Great Marlin Race which has taken almost two years to materialize as something that will “positively impact various sectors of Seychelles and also contribute to worldwide knowledge of billfish.”

The scientific data gathered is not only expected to be shared internationally but locally as well with Seychelles Fishing Authority and with students in the Marine and Fisheries Science study program at the University of Seychelles.

The Seychelles islands in the Indian Ocean are known to have one of the richest big game fishing grounds in the world.