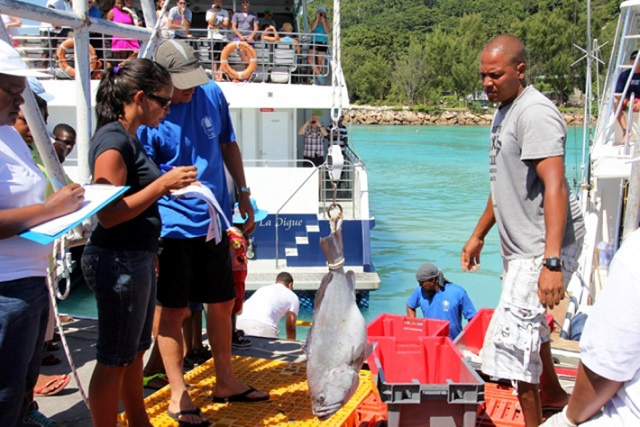 One of the competitions on the Seychelles Sports Fishing Club calendar is the La Digue tournament scheduled for October. (Seychelles Nation)

Boats for the tournament will be allowed to depart from the Marine Charter, Eden Island Marina and Providence and to fish at two fishing grids – northeast and southeast of Mahe. Those fishing outside the two grids will be disqualified.

All teams will have to abide by the International Game Fishing Association (IFGA) rules for this tournament. The only exceptions to these rules will be in the following circumstances; where once a fish is hooked, the rod can be passed to only one angler. Once the rod is passed to the angler, it cannot be transferred to another angler and IGFA equipment rules also apply. However, the IGFA angling rules do not apply to ladies and junior competitors.

The chairman of the club, Tarak Patel, told SNA that "for this tournament, the main battle will be against the weather. It will be very tough for everyone involved, but at the same time it is one we always look forward to and I think it will go well."

Seychelles, an archipelago in the western Indian Ocean, is currently in its southeast monsoon which starts from May to October and brings strong winds making the sea choppy.

Other prizes include the heaviest fish caught and the species included are barracuda, dorado, bonito, yellowfin tuna and wahoo. A prize will also be awarded for the most-released billfish.

Patel said that the season so far has been a very good one and the club is "very pleased that we have been able to hold our scheduled tournaments so far and to be honest, the level of participation has been very good."

Four tournaments have taken place - the Heineken Slam, the National Championship, the Marlin slam and the Trevally Slam.

This year, a team from the UAE also participated.

"The team has been involved in all tournaments so far and they have even come back a week after each tournament for the prize giving ceremony, which shows their appreciation for what we are doing," Patel added.

He said the UAE team expects to sign a partnership agreement with the Seychelles Sports Fishing Club in December.