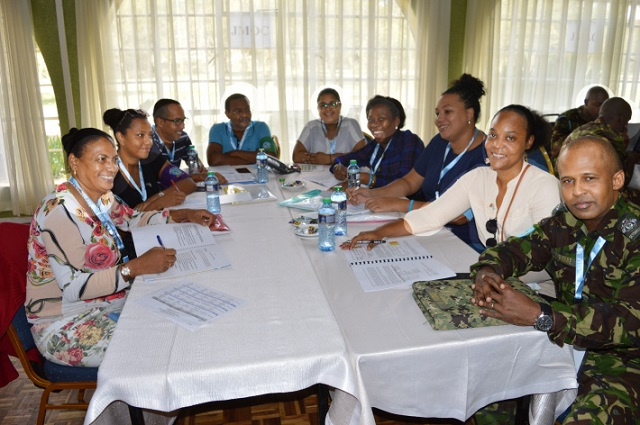 The Seychelles' delegates at the Command Post Exercise (CPX) in Kenya in March. (Seychelles Nation)

Member states of the Eastern African Standby Force (EASF) are attending a workshop in Seychelles to review data collected in its Command Post Exercise (CPX) in Kenya in March, to better prepare for incidents requiring its instant mobilisation and peace support operations.

During the five-day workshop, organised in collaboration with the Seychelles Defence Forces (SDF), participants will review the four main points of the first exercise – training, advocacy, media awareness and logistics.

In his opening address, the Minister of Internal Affairs, Errol Fonseka, said that "this after-action review of the CPX is an important opportunity for the Secretariat and member states to examine their experiences and perceptions of the exercise, to identify the successes, challenges, as well as make recommendations following the exercise."

Seychelles, a group of 115 islands in the western Indian Ocean, is one of 10 countries that make up the EASF alongside Burundi, Kenya, Uganda, Djibouti, Comoros, Sudan, Rwanda, Ethiopia and Somalia.

"From the inception of EASF, and since signing the Agreement on establishing the Standby force in June 2014, Seychelles has continually demonstrated its commitment by participating in the activities organised by the Secretariat," added the minister.

Representatives from the African Union are also attending the conference and the chief of staff for the military component of EASF, Colonel Solihi Abdallah Rafick, told SNA that this is because "they are the chief highest control because we are part of the five regions on standby."

Rafick said that after "this workshop there will be an evaluation report that we have to correct because before the Command Post decides, this will help prepare the field training exercise."

"Once we evaluate our skills, our capabilities then we can go through the field training that will need 2000 – 3000 people, it's a big exercise," he added.

However, he explained that before the big exercise is held there is a mapping exercise that will take place as preparation for the field training.

The EASF command post is more civilian than military as it wanted a more integrated approach to help with the protection of civilians in areas of child protection, the media and gender-based violence".

"We deploy our forces for peace support operations with those at-risk being women and children – which is why we are taking an integrated approach to continue to protect them," said Rafick.

An integrated mission planning course will also be held for regional facilitators at the SDF.

The EASF deployed a team of 10 observers as part of the international election observer mission to observe the legislative and presidential elections process in October 2020.

It is a regional organisation mandated to enhance peace and security in the Eastern Africa region. It is one of the five regional multidimensional forces of the African Standby Force (ASF) consisting of military, police and civilian components.