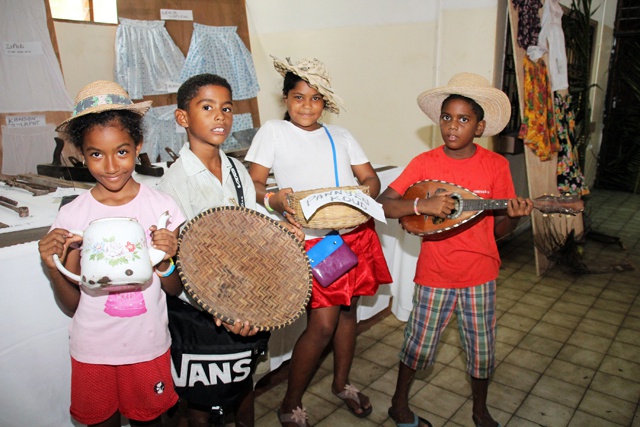 The younger generation on the Seychelles island of Praslin getting acquainted with objects used by their great grandparents. (Romano Laurence, Seychelles News Agency)

(Seychelles News Agency) - Festivities to mark the 29th Festival Kreol may have come to an end but it has surely been a week that brought back many memories to the elder generation while providing a better insight of the different aspects of the Creole heritage to the younger generation.

On the Seychelles second most populated island of Praslin the residents have shown that they are still holding on to their much treasured old plates, cups, musical instruments, clothing, cooking pots amongst other objects that have today been replaced by modern ones.

Some 60 such artefacts featured in a four day exhibition which ended on Friday in the Baie Ste Anne district, an opportunity for the many children that visited to be better informed of the important uses of the old objects that date back to many years ago.

One popular exhibit was an old record player and disks that date back to some 40 years ago. The items, most of them still in good conditions were collected from different households on the island that has a population of around six thousand people.

"We wanted to show the youths what we used 30 or 40 years ago, so that if they ever come across any of these objects they can also keep them instead of throwing them away," Nelle Marie who helped put together the exhibition told SNA.

"It is good for young people to know how and for what purpose these objects were used. Although they might not use it themselves, they can learn about how things were different back then," said Angeline Marie, an elderly resident of Praslin, who contributed several items to the exhibition.

Praslin, which is a popular amongst tourists choosing to holiday in Seychelles, does not have a national museum. There is however a private museum located at Cote D'or where the owner who also runs a self-catering business has tried to collect some of the old artefacts which he proudly shows to visitors to the island.

SNA presents a collection of photos of the various objects that featured in the exhibition on Praslin during Festival Kreol. (Romano Laurence, Seychelles News Agency) Photo License: CC-BY