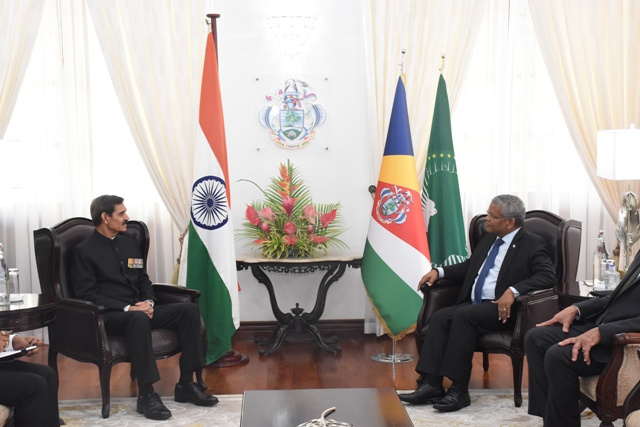 The outgoing Indian High Commissioner to Seychelles has said his tenure in the island nation has been a beautiful experience and over 20 projects have been accomplished.

General Dalbir Singh Suhag made the statement to reporters on Tuesday, after he paid a farewell call on Seychelles' President Wavel Ramkalawan at State House.

"Seychelles is a beautiful country and like I say it is a paradise on earth. People here are very, very warm and it has been a wonderful experience. When I came here, we decided to push for developing projects and we started these high impact community development projects," he said.

When he first arrived in Seychelles, Suhag presented his credentials to former President Danny Faure in June 2019.

He said that after his accreditation in the eight to nine months before the COVID-19 pandemic hit the world, "we have been able to do 22 projects, which were completed of which 10 were inaugurated by me and 10 others by the president."

One of the projects was the completion of the Magistrates Court at Ile du Port, a man-made island, which became operational in August 2020.

As for his future plans, the outgoing Indian High Commissioner said that "for 42 years I was serving in the Indian military as the chief of staff and five years after that I came here. So, I think I put in a lot of service time, but I'm still available to my country for anything I could contribute in any manner."

India and Seychelles, an archipelago in the western Indian Ocean, have a long and strong relationship as well as cultural ties.

Seychelles has a large community of Indians, mainly those who settled a long time ago in the colonial area, with several generations of descendants, which form part of the Seychelles nation, together with those of African, Chinese and European descent. There is also a substantial number of Indian expatriate workers in the country.

The Indian government has also provided many training opportunities and human resource development to enhance the capability of the Seychelles Defence Forces.

Most recently, India announced that it will be helping Seychelles with the installation of a second coast guard radar system.