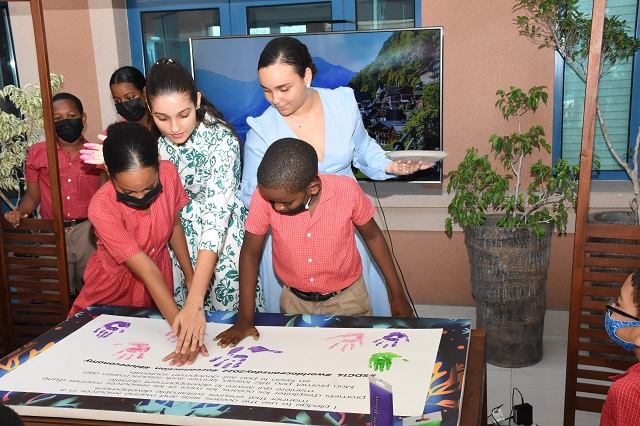 Aurelie Payet and Juan Hotive from Anse Etoile Primary School said that they have learned of the importance of protecting the ocean. (Seychelles Nation)

A group of children in Seychelles made a pledge to protect the ocean in one of several activities organised to mark World Oceans Day on June 8.

The aim of the activities is to raise awareness among children on the need to protect the ocean and the importance of the concept of the Blue Economy.

A group of primary school students visited the Department of Blue Economy, where they learned more about the Blue Economy and ways to protect the ocean.

"We decided to focus on the children today, where we believe it is very important to include them into our activities because we need to educate and sensitise them about how important it is to protect our oceans," said the principal information and communication officer at the Department of Blue Economy, Elna Etienne.

She said that the children are of the generation that will be most impacted by depletion of ocean resources and, therefore, they must understand from an earlier age, the importance of the Blue Economy and the ocean.

The children who were from the Anse Etoile and Perseverance Primary Schools followed a short presentation about Blue Economy from Terence Crea, the principal programme development officer at the department.

The children then all made a pledge to protect the ocean by placing a coloured imprint of their palms onto a canvas in English, French and Creole.

"This canvas will be displayed at the Ministry's headquarters as a reminder that the children of Seychelles have promised to look after the ocean," said Etienne.

Speaking to the media after the event, Aurelie Payet and Juan Hotive, from Anse Etoile Primary School said that they have learned of the importance of protecting the ocean.

"We have learned that it is not only about littering in the ocean, but we must not litter everywhere, even on land, as when it rains, they can eventually end up in the ocean and affect our sea creatures and ourselves," said the two students.

World Oceans Day is an international day that takes place annually on June 8. It was officially recognised by the United Nations in 2008 to support the implementation of worldwide Sustainable Development Goals (SDGs). The day also seeks to garner public interest in the protection of the ocean and how to sustainably manage its resources.

SDGs Forum: There is a dire need for Seychelles to be more self-sufficient and resilient to external shocks, says President Ramkalawan

Reliant on others to eat, Seychelles refines food security plan ahead of UN summit