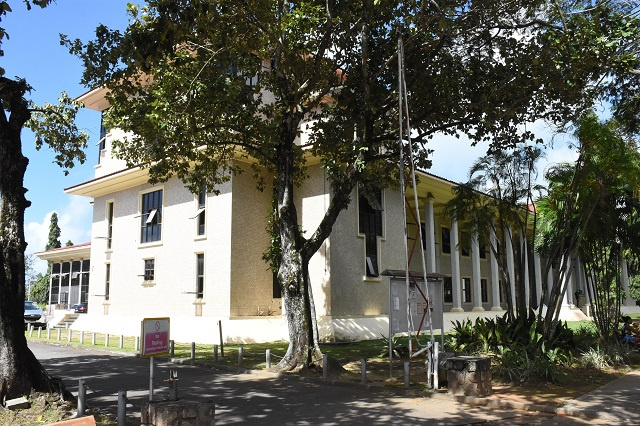 The National Library building, which housed the National Archives and the library, was shut down in August 2013 following a fungus infestation. (Seychelles Nation)

(Seychelles News Agency) - Renovation work on the Seychelles National Library building is expected to be completed by May 2023, said a top official of Green Island Construction Company (GICC) contracted for the project.

Angelique Antat, the general manager of GICC – a subsidiary of the state-owned Island Development Company (IDC) – made the announcement on Wednesday during a visit to the premises.

Antat said when the renovation is completed in May next year, the building will be something completely new.

The National Library building, which housed the National Archives and the library, was shut down in August 2013 following a fungus infestation.

The chief executive of the Infrastructure Agency, Jitesh Shah, told reporters that "because the contractors have removed everything from the building leaving only its outer shell, the fungus infestation that was an issue before will no longer be a problem."

He attributed the original infestation of fungus to the inappropriate ventilation systems that were put in place for certain areas.

"We see that when centralised aircon systems stop working they are replaced with single units leading to situations of fungus infestations as we circulate the same air over and over. In addition to the new ventilation systems to tackle the fungus problem, the building's finishing will consist of materials that are easier to clean and collect less dust – as dust is one of the mediums the fungus thrives on," said Shah.

Antat said they "are confident that we will not have the same problem that was there in the past. We have been in contact with companies specialising in air-conditioning, so we will be installing systems that will ensure there is no more fungus in the building."

GICC was contracted to carry out the renovation at a cost of $5.6 million (SCR75 million).

The government of Seychelles, an archipelago in the western Indian Ocean, is funding the project through loans from local banks.

GICC contracted an architect to redesign the building which will mainly have library facilities and some administrative offices on the top floor. The company said that the current garden found on the premises will also be upgraded so that visitors will feel comfortable inside as well as outside the library. There will also be a section where students and adults will be able to comfortably carry out their research work.

Furthermore, the National Archives will no longer be based in the renovated building due to space constraints.

"When you establish archives, it is not something done for five or six years but rather for a minimum of 30 years – which is why it should be in a place where it can continually grow," said an officer of Seychelles National Institute for Culture, Heritage and the Arts, Cecile Kalebi.

Apart from the need for space, Kalebi also explained that the Archives will be housed in another building so that "should there be another fungus outbreak we know only one of those institutions that would be affected and not the whole system."

Currently, the Archives are based at Maison Helena at Ile du Port – a man-made island next to the capital Victoria.

She said that once completed the newly renovated library will have modern amenities in keeping with the broadened mandate of such institutions worldwide.

"Libraries are no longer just areas to borrow books from. A library currently provides an e-book service and we will also have physical copies of books and look for additional titles to encourage the youth and the public at large to continue visiting," said Kalebi.

After a modern facelift, Seychelles National Museum of History reopens to public