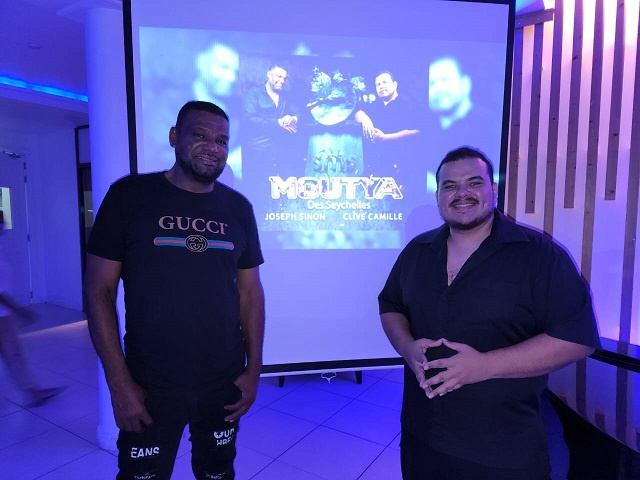 The new album is the production of a group called SMS made up of well-known local artists Clive Camille (right), Joseph Sinon and Elijah. (JUliette Dine)

In a bid to keep alive the Moutya, a traditional dance from Seychelles, a group of local artists launched on Wednesday an album with a mix of Moutya music and the Sega dance beat, another traditional dance of the islands.

Called "Moutya de Seychelles" the new album is the production of a group called SMS made up of well-known local artists Clive Camille, Joseph Sinon and Elijah. The album also features veterans of the Moutya beat such as Jean-Marc Volcy, Andre Dubel, Brian Matombe and Andreix Rosalie.

Camille, the youngest singer of the group at 34 years old, said the purpose of the album is to keep the Moutya alive especially now that it is recognised by UNESCO. On December 15, 2021, UNESCO added this dance of Seychelles, an archipelago in the western Indian Ocean, to its list of intangible heritage.

The album, which features 15 songs, both old and new, is accessible on digital platforms such as iTunes, Spotify and Deezer.

Moutya is a traditional dance created by African slaves who arrived in Seychelles with French settlers in the 18th century. It is a somewhat slow dance with pelvic moves performed to the beat of a heated goatskin drum. It was originally performed around a bonfire, deep in the forest in the dead of night. The dance was an expression of resistance, allowing enslaved people to share their suffering and sing about the difficulties they faced, far from their masters' ears.

Today, musicians use more modern instruments and no fire is needed but the songs still evoke the chant of the slavery days and it is better danced in the open air.

Camille said they came out with the album because "the biggest problem we are experiencing in Seychelles today, even if UNESCO has recognised Moutya as intangible heritage, is that it is not alive. Moutya is not being played in the districts like it was before."

He said that Mauritius is promoting its Sega very well and Seychelles is not doing as much for the Moutya.

"Our vision is to revive the cultural content of the past and bring it back to life, that's why we re-produced some parts from the music archive of Seychelles with the idea of going international with it. We know that there are some Seychellois diasporas abroad who do not have the chance to experience these things, we are hoping that this will attract them. Even for the tourists who come to Seychelles to see and dance to the Moutya," said Camille.

The Sega Moutya played by the SMS group is more modern with the use of other instruments such as acoustic drums, guitar and keyboard.

Camille said their songs are "more modern, more electronic and done on a stage rather than around a fire. It is a bit difficult to do authentic Moutya which was composed and sung spontaneously."

He said that research was done to obtain some oral history on Moutya with people who remember the dance well, asking them what they sang about and where they danced.

The lyrics of today's Moutya also differ from that of the past, said Camille.

"In the old days, the lyrics of Moutya were centred on what happened during the time of the people who sang them were living. They mostly expressed their experiences such as slavery and things in their environment but today people sing about the issues of not getting paid on time like Jean-Marc Volcy did when he sang about "bourzwa" [boss]," he explained.