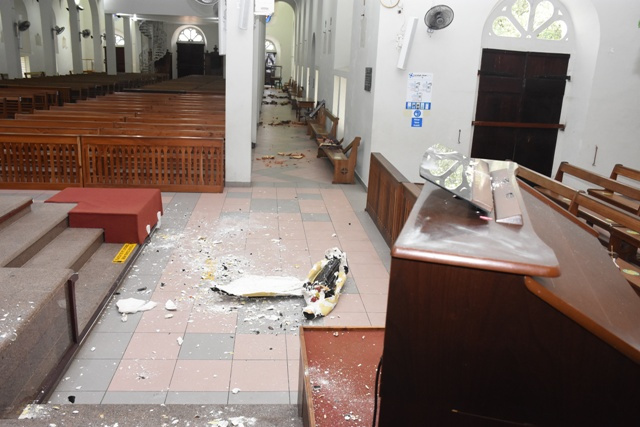 All the statues and prayer stations of the cross in the cathedral have been destroyed and a fire was set to benches and crucifixes. (Seychelles Nation)

The President of Seychelles, Wavel Ramkalawan, has strongly condemned and denounced the acts of vandalism that took place in the Roman Catholic Cathedral of the Immaculate Conception in the capital Victoria on Thursday evening.

All the statues and prayer stations of the cross in the cathedral have been destroyed and a fire was set to benches and crucifixes.

Ramkalawan, who is also an Anglican priest, said he is saddened and appalled that such unacceptable acts have been committed.

"This is not only a crime against the church but a crime against the whole country, a crime against our very own harmonious culture of tolerance among our people. This is a place of worship where we raise our prayers to our creator, our children receive sacraments here, where we share solemn spiritual moments and where we come for consolation and support when our loved ones' lives depart," he said.

The President is offering a reward of SCR 100,000 ($7,600) for anyone who can provide information while the police have launched an investigation.

The Bishop of the Roman Catholic Diocese of Port Victoria, Alain Harel, said what has happened is shocking and sad.

“For now it is a shock and suffering and I tell you frankly I don’t know what to do next. But I do know that the Cathedral is a strong symbol. It is the mother  of all churches in the diocese. When we came to the church we see a crucifix that has been destroyed... The crucifix shows us Jesus on the cross who has forgiven but forgiveness does not mean that  we cannot fight against ideologies that destroy a society,” he said.

Father David Alcindor of the Roman Catholic Diocese told SNA that what happened is very sad not only for the Catholic community, but for the country as a whole.

"All the statues found in the church were smashed and we have also seen traces of petrol on the benches where they have tried to set them on fire. The artefacts that were broken are priceless and have been in the church for many years," he said.

Alcindor said that "we will have to sit and decide what to do next. Once the police have completed their work in the cathedral, we will resume our services – but first, we must hold a purification and reparation ritual first."

He added that "when we locked the doors in the evening, we did not know there was someone in the church, so these things happened during the night."

Antoine Desnousse, head of visible policing in the Seychelles Police Force, told reporters that although it is yet to establish the motive and exactly what happened, it is treating this incident as very serious.

"While the Cathedral does not have security cameras on its premises, the police are looking at cameras found in other buildings that may give us clues of whether there were vehicles or anything else as there were no visible signs of a break-in," said Desnousse.

He did not divulge more information as an investigation has started.

The president of the United Seychelles (US) opposition party, Patrick Herminie, said that it is with great sadness and regret that the party learned of the vandalism at the cathedral.

"These actions show the degeneration in morality in our small country and that many of us have lost respect for religion. United Seychelles joins together with the Seychellois community to condemn these barbaric actions and pray that in the difficult moment for the Catholic Church and the people of Seychelles in general, severe actions are taken to bring those responsible to justice," said Herminie.

Thela Lalande, a congregant of the cathedral, said: "I was speaking to a nun, who is over 80 years old and she told me this is the first time something like that happens at the Cathedral. It is the devil's work; it is so sad that this has happened."

Seychelles has a predominantly Roman Catholic population, with more than 70% being believers, followed in congregation size by Anglicans, Hindus, Muslims and other faiths.

General » Be a reporter: Write and send your article » Subscribe for news alert
Tags: Cathedral of the Immaculate Conception, Roman Catholic Diocese