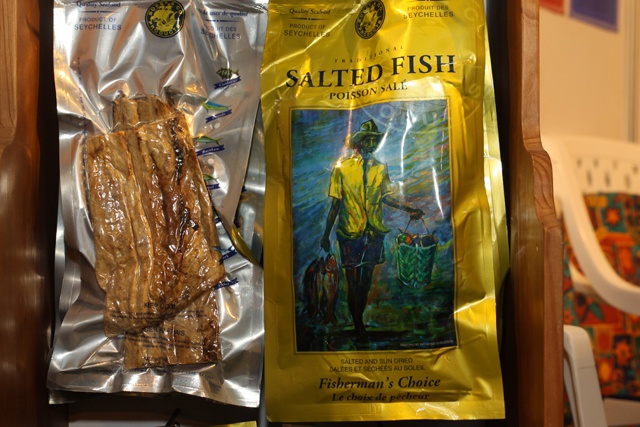 Salted, sundried and vacuum seal packed fish which is produced by Louis Bossy a Seychellois living on the second most populated Seychelles island of Praslin.(Joe Laurence, Seychelles News Agency)

(Seychelles News Agency) - Among the many varieties of fish that the small population of around 90,000 people of the Seychelles consume, the rabbitfish, or kordonnyen as it is called in the native Creole language, is considered a treat and a delicacy.

The rabbitfish are caught using traditional fish traps made from bamboo which are strategically placed among the reefs by local fishermen.

When hoping to catch rabbitfish, the best time is usually four days before or after the full moon during the north west monsoon from October to March, as the parent fish visit the reefs to lay their eggs.

Unlike other fish which is normally consumed fresh by locals, the rabbit fish is usually salted and dried. The preserved rabbitfish has a longer shelf life and is often purchased as a souvenir of the islands by visitors.

For nostalgic Seychellois living abroad, this is a good way to stay close to their island home and the exquisite taste of the seafood of Seychelles.

For Louis Bossy aged 40, a Seychellois living on the second most populated Seychelles island of Praslin, he noticed that whenever friends or relatives living overseas came to visit, they would never leave the islands without their salted rabbitfish.

That was a lightbulb moment for the entrepreneurially-minded Louis, who decided to invest in a machine to vacuum-pack the fish.

“Other people also started bringing their fish from elsewhere to pack, which led to acquiring a license to legally prepare and pack these products myself,” he said.

Later on, he decided to invest further, by having his own boat and fish traps.

From kilos to tonnes

Bossy began to frequent reefs around Praslin such as Consolation Bay and Baie Ste Anne, which are renowned for their rabbitfish populations.

However, his catch was never exclusively made of rabbitfish but included other types of fish such as the kakatwa (parrot fish), sirizyen (surgeon fish) and vyey (grouper).

“So instead of giving them away, I decided to package them as well,” said Bossy.

Eventually, other fishermen also began to enquire if he would like to buy their catch, which often included bigger fish such as blue marlin.

With an increased supply and variety of fresh fish, the businessman then started to diversify his product offering.

A hit with the locals

Not being an enthusiastic cook himself, Bossy realised the task of cleaning fish was time-consuming, messy and not well-suited to modern, busy lifestyles.

He began to offer fresh fish that was gutted, de-scaled and vacuum-packed, ready to be taken out of the fridge or freezer and cooked. Then he decided to offer fillets, kebabs, sausages, mince and even burger patties – all made out of healthy, fresh fish.

The fish burgers have been described as a hit among locals, and are particularly popular when made at fairs and other public events.

“It is more costly than a beef burger because it is heavier - over 100 grams - but it has its own special family secret recipe included,” revealed Bossy.

At his factory located at Consolation, Praslin, the young entrepreneur has nine employees and has invested in a cold room and a range of fish processing machinery.

According to Bossy, he has also gone the extra mile by committing his product range to the highest possible food hygiene and sanitation standards.

Of the view that fish is certainly a healthier option than meat, Bossy is keen to participate in the recent healthy eating campaign launched by the current Miss Seychelles, Camila Estico.

Bossy is now looking towards a bright future for his company and is now making tentative baby-steps towards the export market.

Demand for his products is high in Mauritius, Canada and Australia even though the price of exporting fresh fish via air freight is costly.

Back home, Bossy has found a high demand for his products on the main populated island of Mahé, which he is supplying via various retail outlets.

On his native island of Praslin, several of the hotels there are requesting his products, which sell for anything between 60 rupees (around $4.20) for a small packed fillet to 150 rupees (just over $10) for a packet of minced fish.

But his success has not come without ups and downs, for instance, discovering that in Seychelles, customer referrals were more important than branding and packaging.

“I was very surprised to find that packaging in Seychelles does not work,” joked Bossy.

“It’s actually word of mouth, somebody taste your product and likes it and says so to someone else! Without any fancy packages... if it’s good, it sells!”

The new gold of Seychelles

Although Bossy has tried his hand at a number of different ventures in different sectors, including the popular flavoured ‘Bossy Rum’, it seems he has found the most success in retailing fish, and believes that now is the time for Seychellois to start investing in the fisheries sector.

“Fish is going to be the leading economic pillar of Seychelles in the years to come,” he predicted, reflecting the Seychelles government’s recent push towards the sustainable harvest of more of the resources contained in the archipelago’s vast Exclusive Economic Zone.

Earlier in October, the Seychelles National Assembly approved a new fisheries bill to replace the current Fisheries Act, which has been in place since 1986.

The bill will usher in a new era of fisheries management with specific regulations for foreign vessels fishing in Seychelles’ waters, hopefully ensuring fairer competition for local fishermen and protection for threatened marine species, but it is as yet unclear if any species of fish will be protected.

The Seychelles’ tuna fishing industry is reportedly worth around $370 million in annual income to the economy, according to the Seychelles Fishing Authority.

Port Victoria, situated in the capital of the Seychelles, is one of the busiest tuna fishing ports in the world, where an average of 200,000 metric tonnes of fish are landed and transhipped every year. The nearby Indian Ocean Tuna Ltd is one of the largest tuna canneries in the world, producing 1.5 million cans of tuna per day.

But overfishing, a worldwide problem linked to global warming and exploding populations, is a very real threat hanging over the Seychelles. Fishermen will usually target a particular species until numbers have been reduced to a point where fishing them is no longer commercially viable, and then move on to the next species lower down in the food chain.

If valuable species of small coral-grazing fish such as parrot fish and rabbitfish, which keep algae populations in check, are over-exploited, it could lead to a further increase in coral reef decimation.

But Australian coral reef researcher Nick Graham told SNA in a recent interview that he believed these valuable herbivorous fish could still be fished if managed and researched properly.

“Carefully managed herbivore fisheries can be enough to maintain this important ecosystem function,” he said, adding that species such as rabbitfish were fast-growing enough to sustain some fishing and still maintain high enough numbers.