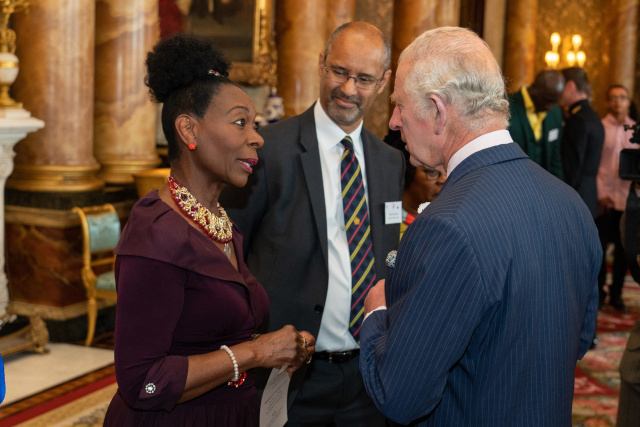 Britain's Prince Charles, Prince of Wales (R) speaks with British-Trinidadian actress Floella Benjamin (L) at a reception to celebrate the Commonwealth Diaspora of the United Kingdom ahead of the Commonwealth Heads of Government Meeting in Rwanda, in London, on June 9, 2022. (Dominic Lipinski / POOL / AFP)

The UK government intends to fly the first planeload of 31 claimants to Rwanda on Tuesday -- shortly before Charles is due to represent his mother Queen Elizabeth II at a Commonwealth summit in Kigali.

Prime Minister Boris Johnson -- who is also set to attend the summit -- welcomed his government's victory in a High Court hearing Friday that gave the plan a green light.

"We cannot allow people traffickers to put lives at risk and our world-leading partnership will help break the business model of these ruthless criminals," Johnson tweeted.

Charles, however, joined others including senior Christian clerics in denouncing the plan, and fears the issue could overshadow the Commonwealth summit on June 24-25, The Times reported.

"He said he was more than disappointed at the policy," the newspaper quoted an unidentified source as saying.

A spokesman for Charles declined to comment on private conversations, "except to restate that he remains politically neutral".

"Matters of policy are decisions for government," the spokesman added.

The reported intervention from the Prince of Wales threatens to stoke controversy about his political views as he shoulders more of the duties of his 96-year-old mother.

In a BBC documentary marking his 70th birthday in 2018, Charles said he would no longer make public interventions on political matters once he becomes king.

In Kigali, Charles and Johnson are due to meet Rwandan President Paul Kagame, whose government is accused by campaigners of persecuting political dissidents and gay people.

But after a one-day hearing in London on Friday, judge Jonathan Swift sided with the government's contention that Rwanda was a "fundamentally safe and secure" destination for would-be refugees.

He ruled that it was in the "public interest" for Home Secretary Priti Patel "to be able to implement immigration control decisions".

However, Swift gave permission for his ruling to be appealed, and Court of Appeal judges are expected to take it up on Monday, ahead of a fuller two-day High Court hearing next month.

Rose Hudson-Wilkin, the Anglican bishop of Dover where Channel migrants have been arriving on fragile vessels, said the policy made her "deeply ashamed to be British".

"It feels inhumane," she told Times Radio after Friday's ruling.

Lawyers for the claimants said Patel's interior ministry had claimed endorsement for the plan from the United Nations High Commissioner for Refugees (UNHCR).

But addressing the High Court, the UN agency's lawyer Laura Dubinsky denied that.

She added that the would-be refugees were at risk of "serious, irreparable harm" if sent to Rwanda, and that the UN had "serious concerns about Rwandan capacity".

But Patel has dismissed all objections to her agreement, which is worth £120 million ($148 million) to Kagame's government.

She said Friday the government "will not be deterred in breaking the deadly people smuggling trade and ultimately saving lives".

The government said it had issued deportation notices to another 100 people, beyond the 31 who are due to leave on Tuesday's specially chartered flight from an undisclosed airport in Britain.