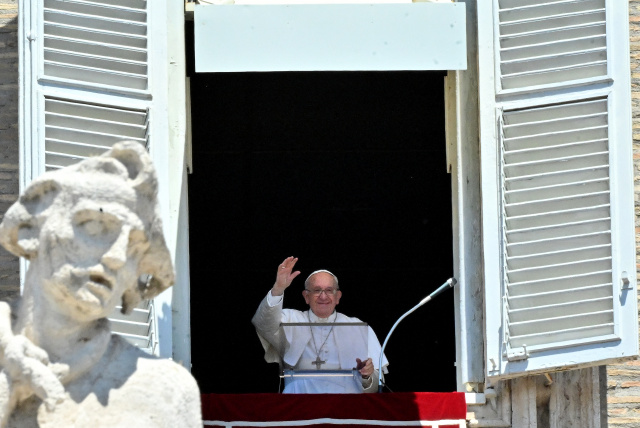 Pope Francis waves to the faithful during the Angelus prayer from the window of the Apostolic Palace overlooking St. Peter's Square at the Vatican, on June 12, 2022. (Filippo MONTEFORTE / AFP)

(AFP) - Pope Francis said Sunday he hoped to visit the Democratic Republic of Congo and South Sudan as soon as possible, after cancelling an upcoming visit due to a knee problem.

"Dear friends, with great regret, due to problems with my leg, I have had to postpone my visit to your countries," the 85-year-old said after delivering his weekly Angelus prayer in St Peter's Square.

"I truly feel great sorrow for having had to postpone this trip, which means so much to me. I apologise for this.

"Let us pray together that, with the help of God and medical attention, I will be able to be with you as soon as possible. Let us be hopeful!"

The Vatican on Friday announced that the trip planned for July 2 to 7 would be rescheduled, although no new date was set.

"At the request of his doctors, and in order not to jeopardise the results of the therapy that he is undergoing for his knee, the Holy Father has been forced to postpone," spokesman Matteo Bruni said.

Francis has been suffering from pain in his right knee in recent weeks and last month relied on a wheelchair for the first time at a public event.

He has cancelled numerous engagements -- a scheduled trip to Lebanon in June was postponed -- and has sometimes been seen struggling to walk.

The Vatican has not said officially what the problem is, although sources have told AFP he has chronic arthritis.

The pope himself has also spoken of an injured ligament in his knee.

Also on Sunday, the pope urged the world not to forget about the war in Ukraine, triggered by Russia's invasion in late February.

"The thought of the people of Ukraine, afflicted by war, remains vivid in my heart," he said.

"Let the passage of time not temper our grief and concern for that suffering population.

"Please, let us not grow accustomed to this tragic situation! Let us always keep it in our hearts. Let us pray and strive for peace."