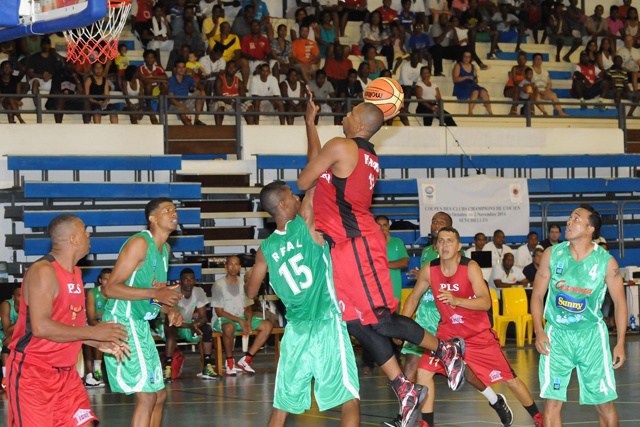 (Seychelles News Agency) - The winners of the Indian Ocean Club Championship (IOCC) basketball tournament taking place in the Seychelles will be known this weekend.

Teams from the host country have been battling against teams from Indian Ocean neighbours of Mauritius and the French overseas departments of Mayottes and Reunion at the Seychelles basketball arena at the Roche Caiman Sports Complex not far from the archipelago’s capital of Victoria since last weekend.

On the women’s side Seychelles’ Anse Etoile Stars lost all hope of reaching the finals on Thursday, as was the case for the men’s team, Beau Vallon Heat defeated by Reunion’s St Pierre in a match played that same evening.

Stars’ second defeat in the competition was at the hands of Mauritius’ L'Union Sportive Beau Bassin Rose-Hill, which narrowly edged the Seychelles women champions 63-59 to secure a spot in the finals.

Stars managed to control the match up until the final quarter of the game when Beau Bassin Rose-Hill upped a gear to outshine the local side.

They led by 8 points at the end of the third quarter but managed just eight points in the final 10 minutes against 21 points for the visitors.

The defeat of Anse Etoile Stars coached by Clifford Joubert has benefited the other Seychelles women’s team Mont Fleuri that will be up against the Mauritian team in the final match on Sunday.

The two – Mont Fleuri and Beau Bassin Rose-Hill already got a taste of the opponent’s capabilities in the opening match last weekend with Beau Bassin coming out victorious with the final score reading 78-62.

The rematch may be an opportunity for Mont Fleuri to avenge the previous defeat and the team’s coach Tony Juliette has welcomed the two days rest enjoyed by his team ahead of the final game. Juliette believes that the players “will be more refreshed than their opponents who have enjoyed only a day of rest prior to the final.”

On the men’s side Seychelles Beau Vallon Heat suffered defeats in all three matches played.

In its third match on Thursday the team hailing from the northern part of the Seychelles main island of Mahe was clearly no match for Reunion’s St Pierre that managed to win the match on a final score that read 74-44.

Heat will play nevertheless play a last match against BCM of Mayotte later today, merely a formality or given a sharp turnaround in motivation their last chance to save face and wrap up the tournament on a high with a victory.

The other local side representing the host country in the men’s event has so far enjoyed two wins over the other home team Beau Vallon Heats as well as Mauritius' Real of Mauritius in the tournament’s opening game.

Hawks only defeat so far was in its last match played on Wednesday in a closely fought encounter against Reunion’s St Pierre.

Hawks initially managed to stay close on the scores against St Pierre enjoying a deficit of only one point at the end of the third quarter when the score read 38-39 in favour of the visiting team but they lost their footing in the final quarter and succumbed to a 6 points margin in the end the final score reading 62-56.

The defeat has reduced the possibility of the local side winning the tournament by 50 percent as their final game on Sunday afternoon will be against the undefeated BCM from Mayotte.

Hawks’ coach Clifford Joubert told SNA the team was very disappointed for losing at the hands of St Pierre noting that they had hoped to land a firm footing towards winning a first IOCC title.

Nevertheless Joubert argues that all is not lost, adding they still have a chance to win the championship if they can defeat BCM by more than 6 points on Sunday.

Asked which of the two sides - BCM or St Pierre – appear more intimidating, he said “they are of the same calibre, implying they can be matched by his team PLS Hawks.”