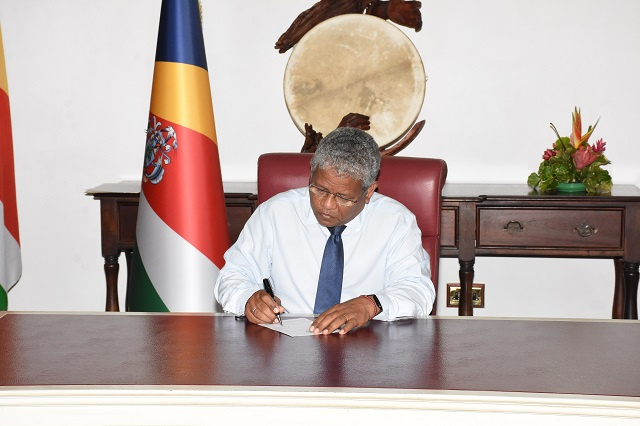 President Ramkalawan assented to the 10th amendment to the Seychelles' constitution on Tuesday. (Seychelles Nation)

Seychelles' President Wavel Ramkalawan on Tuesday assented to an amendment to the Constitution that gives the Seychelles Defence Forces (SDF) the right to enforce domestic law in relation to public security, environmental protection and maritime security.

The amendment gives a fifth function to the military and enables it to work alongside the Seychelles Police outside of states of emergency.

Prior to the amendment, the SDF had four functions previously - to defend Seychelles and its territory; to assist the state with its international obligations; to assist the civil authority in emergency cases and disasters in keeping peace and order if asked by the president, and finally to participate in civil work for national development.

When the Defence (Amendment) Bill was published in the Official Gazette on May 5, 2022, the Ombudsman, Nichole Tirant-Ghérardi, voiced concerns about the 10th amendment of the Constitution of Seychelles – as did a non-governmental organisation the Association for Rights, Information and Democracy (ARID).

One of the reasons for concern expressed by Tirant-Ghérardi is that the separation of civil policing from the role of the military occurred for fundamental reasons that Seychelles valued as a cornerstone of the Third Republic democracy.

Ramkalawan said that the amendment makes it clear what is the role of the defence forces and the powers being given to them and that they will not be replacing the police.

Meanwhile, the Attorney General, Frank Ally, said the amendment "ensures that the laws that exist and the laws of the future will stand a constitutionality test."

He reassured members of the public that the law is not one that should be feared and that "this is not a constitutional amendment that in the coming week or so, you will find that army taking over from the police."