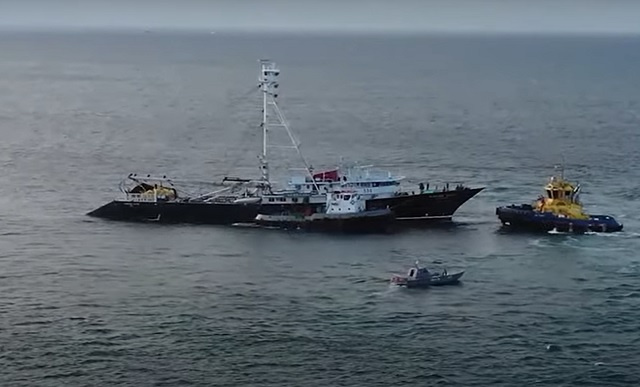 The Spanish-flagged tuna fishing vessel Albacora Cuatro had a crew of 31 people of six different nationalities on board as well as one Seychellois. (SBC YouTube)

(Seychelles News Agency) - Two Spanish nationals died in Seychelles when their fishing vessel had an ammonia leak while on anchorage close to Port Victoria and local rescue services are still working to contain the leak, a top official said on Thursday.

Jones Madeleine, the public relations officer of the Seychelles Fire and Rescue Services Agency, told reporters that they were informed about the leak on the Spanish-flagged tuna fishing vessel Albacora Cuatro around 3.15 pm on Wednesday afternoon. Today they are still working to contain the leak on the vessel, which was anchored for repair work.

"The work we carried out yesterday was to get the two people who were trapped on the vessel. We sent another team this morning to the vessel to continue the work we started," said Madeleine.

The vessel, which is 88 metres long and 16 metres wide belongs to the Compañía Europea de Tunidos company, although the ship retains the name of the Albacora group, founded in 1974 by Basque businessmen.

The vessel had a crew of 31 people of six different nationalities on board as well as one Seychellois.

"We were unable to rescue one of the persons trapped on the vessel and we are working to do that today. The person was unable to get off the vessel after the leak and has died but we still have to retrieve his remains," added Madeleine.

A paramedic and another medical officer are also working alongside the rescue team in an effort to retrieve the body of the trapped sailor.

Ammonia is a refrigerant used to freeze the brine solution within the fish wells onboard tuna vessels. It is a toxic gas and exposure to it can cause serious and sometimes fatal injuries, including ammonia burns on the eyes and lungs, asthma, blindness, and other pulmonary conditions. It is also flammable and can cause explosions when exposed to high heat.

The authorities confirmed that the vessel's current mooring location means that the leak is not dangerous for nearby residents on the main island of Mahe.

A team of 16 fire and rescue officers is still on the vessel, working to contain the leak.

When the incident was reported on Wednesday afternoon, the police closed off the roads to the Victoria Petrol Station and the Ile du Port quay to clear the area, so rescue and medical assistance officers could get through.

The rescue team working to contain the leak on Albacora Cuatro also called on the public to stay clear of the tuna fishing vessel for their own safety.

As the vessel may currently be a danger to others sailing going close by it, the Seychelles Coast Guard and the Seychelles Maritime Safety Authority have been deployed to keep the passing vessels at a safe distance.

The last such ammonia leak in the Seychelles, an archipelago in the western Indian Ocean, was on French purse seiner Le Titan Concarneau in May 2017. There were no fatalities.