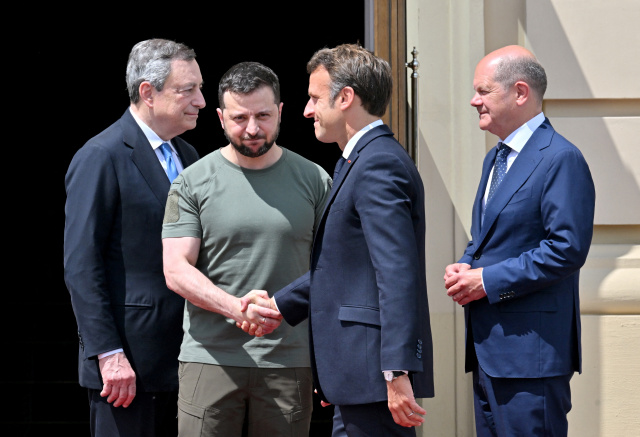 President of France Emmanuel Macron shakes hands with Ukrainian President Volodymyr Zelensky (C,L) flanked by Prime minister of Italy Mario Draghi (L) and Chancellor of Germany Olaf Scholz (R) in Mariinsky Palace, in Kyiv, on June 16, 2022.
It is the first time that the leaders of the three European Union countries have visited Kyiv since Russia's February 24 invasion of Ukraine. (Sergei SUPINSKY / AFP)

(AFP) - The leaders of major EU powers France, Germany and Italy vowed Thursday to help Ukraine defeat Russia and to rebuild its shattered cities, in a visit to a war-torn Kyiv suburb.

"France has been alongside Ukraine since day one. We stand with the Ukrainians without ambiguity. Ukraine must resist and win," Macron told journalists.

Surrounded by the wreckage left by Ukraine's successful but hard-fought defence of its capital in the early stages of the 113-day-old conflict, Draghi said: "We will rebuild everything.

It is the first time the three have visited Kyiv since Russia's February 24 invasion.

Ukraine has applied to join the European Union and, although no-one in Brussels expects this to be a quick process, the leaders of the bloc's most powerful countries were expected to bring President Volodymyr Zelensky a positive message.

Kyiv is also pleading with its western allies to step up supplies of weapons to its forces, which are outgunned by Russian artillery on the frontline in east of the country.

Germany, especially, has been criticised for slow weapons deliveries, but western defence ministers are meeting in Brussels to discuss what more they can do and on Wednesday US President Joe Biden announced $1 billion worth of new arms for Ukrainian forces.

Moscow was dismissive of the European visit, and of the arms supplies.

"Supporting Ukraine by further pumping Ukraine with weapons," warned Kremlin spokesman Dmitry Peskov would be "absolutely useless and will cause further damage to the country".

The new US support package includes howitzers, ammunition, anti-ship missile systems, and additional rockets for new artillery systems that Ukraine will soon put in the field.

Fighting in eastern Ukraine is focused on the industrial city of Severodonetsk, and Russians forces appear close to consolidating control after weeks of intense battles.

Sergiy Gaiday -- the governor of the Lugansk region, which includes the city -- said Thursday around 10,000 civilians remain trapped in the city, out of a pre-war population of some 100,000.

Kyiv's army is "holding back the enemy as much as possible," he said on Telegram. "For almost four months they have dreamt of controlling Severodonetsk... and they do not count the victims."

Moscow's forces have destroyed the three bridges spanning a river between the city and Lysychansk.

Hundreds of civilians are trapped in a Severodonetsk chemical plant, which is under constant bombardment, according to Ukrainian authorities.

Russia said Ukrainian authorities had on Wednesday prevented an attempt at evacuating them.

From an elevated position in Lysychansk, an AFP team saw black smoke rising from the Azot chemical factory in Severodonetsk and another area in the city.

The head of the Severodonetsk city administration Oleksandr Stryuk told Ukrainian television on Thursday that there were about 500 civilians trapped in shelters at the plant.

"Fighting and constant shelling have been going on there for almost a week now," he said, warning that the shelling could damage ammonia storage and trigger a chemical disaster. "It is a miracle that the whole city has not been affected."

The Ukrainian military was using the high ground to exchange fire with Russian forces across the river.

In Brussels, Ukrainian defence minister Oleksiy Reznikov and other officials met with around 50 countries of the Ukraine Defence Contact Group at NATO headquarters asking for a surge in weapons and ammunition.

"Ukraine is really in a very critical situation and therefore, it's an urgent need to step up," NATO chief Jens Stoltenberg told journalists ahead of two days of talks.

Russian President Vladimir Putin meanwhile underscored that he was not as isolated internationally as his foes would wish with a call with China's leader Xi Jinping, their second reported call since Russia attacked Ukraine.

China has refused to condemn Moscow's invasion of Ukraine and has been accused of providing diplomatic cover for Russia by criticising Western sanctions and arms sales to Kyiv.

The United Nations warned a hunger crisis that has been worsened by the war in Ukraine, traditionally a breadbasket to the world, could swell already record global displacement numbers.