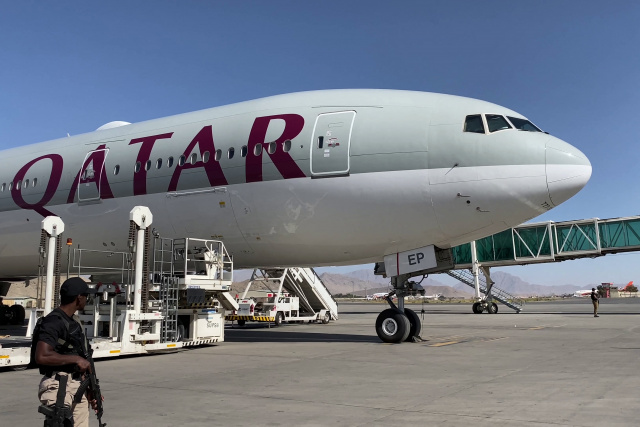 This video frame grab taken from AFPTV footage shows a Qatar airways flight heading to Doha on the tarmac at the airport in Kabul on October 20, 2021. Dozens of Afghan women athletes expressed relief and optimism as they fled Taliban rule on the latest flight out of Kabul on October 20, saying it is a "sweet day for all of us". (Anne LEVASSEUR / AFPTV / AFP)

(AFP) - Qatar Airways on Thursday posted a record net profit of $1.54 billion for the 2021-2022 financial year, a result it attributed to a "successful strategy" during the coronavirus pandemic.

The state-owned airline said the profit result was "200 percent above its highest annual historical profit" and achieved on the back of $14.4 billion in overall income.

It said that the revenue figure was "a remarkable two percent higher than the full financial year pre-Covid" in 2019-2020.

Gas-rich Qatar is among several governments that stepped in to support their national carriers through the coronavirus shutdown, which pummelled global travel and the aviation industry.

Qatar Airways, the Middle East's second biggest airline after Emirates, had reported in September last year an overall loss of $4.1 billion in the 2020-2021 financial year.

The flag carrier said at the time that it had received $3 billion in state aid to weather the coronavirus travel downturn and to offset the losses blamed on the cost of grounding aircraft.

Its chief executive, Akbar Al Baker, praised the "strength, resilience, and commitment" of Qatar Airways Group in the past year.

"In the most difficult period ever in the global airline industry, the airline credits its positive results to its agility and successful strategy," the airline said in a statement.

Qatar Airways said it "continued to focus on customer needs and evolving market opportunities, as well as efficiency and the commitment of its worldwide employees".

"This profit is not only a record for Qatar Airways Group, but also a record among all other airlines that have published financial results for this financial year worldwide," the airline said.

It said its cargo division remained the "leading player in the world", with growth of 25 percent in revenues and an identical figure for cargo capacity.

"Against the backdrop of the pandemic disruption, Qatar Airways Cargo transported more than three million tonnes of air freight and securing eight percent share in the global market," it said.

The airline said it had also "transported more than 600 million doses of Covid-19 vaccines over the course of the pandemic to date".

"Despite the challenges of Covid-19, the national carrier of the State of Qatar grew to more than 140 destinations" in 2021-2022, the airline added.

New routes were opened to destinations across Africa, Asia, Europe and the Middle East, including Abidjan in the Ivory Coast, and Almaty, Kazakhstan.

"We have pursued every business opportunity and left no stone unturned as we aimed to meet our targets," he said.

"Whilst our competitors grounded their aircraft and closed their routes, we adapted our entire commercial operation to respond to ever-evolving travel restrictions and never stopped flying, operating a network our passengers and customers could rely on," he said.

General » Be a reporter: Write and send your article » Subscribe for news alert
Tags: Qatar, aviation