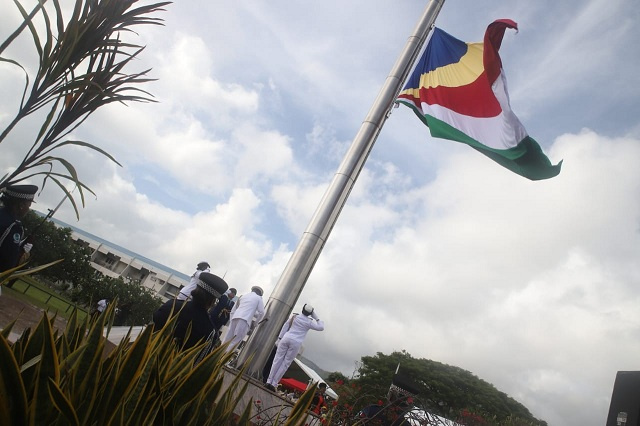 (Seychelles News Agency) - Seychelles’ President Wavel Ramkalawan has reaffirmed the country’s commitment to protect the rights of every citizen through its Constitution.

Ramkalawan made the statement while speaking at the annual flag-raising ceremony on Saturday to mark Constitution Day on June 18, which is also a public holiday. The ceremony was attended by high government officials, representatives of the judiciary and the National Assembly as well as the diplomatic corps.

This year is exactly 29 years since the Constitution of Seychelles was adopted through a referendum on June 18, 1993, paving the way for a Third Republic and the introduction of a multi-party system.

For the first time the ceremonial flag-hoisting took place on all three main islands, Mahe, Praslin and La Digue and was attended by the president and his delegation.

Speaking at the first ceremony at the ‘Lavwa Lanasyon’ Monument (the Voice of the Nation) in Peace Park in the capital Victoria on Mahe, Ramkalawan said he wants the world to know that Seychelles is a democratic state and it will always respect and protect the rights of its citizens.

As is customary, the hoisting of the national flag was done by Seychellois women and men in uniform, accompanied by the national anthem performed by the National Brass Band.

During Saturday’s ceremony, parts of the preamble of the Constitution were also read out. The preamble makes provision for the human rights of each and every Seychellois to be protected.

For the first time in the tradition of this ceremony, the composition of the guard of honour’s platoon was made up entirely of women from the Seychelles Defence Forces and the Seychelles Police under the command of Lieutenant Connie Anthony.

There were also performances of patriotic songs and poems by Seychellois youths.

Prior to 2015, June 18 was celebrated as the National Day. Since then, the island state’s National Day is celebrated on June 29, which was the day it received independence from Britain.