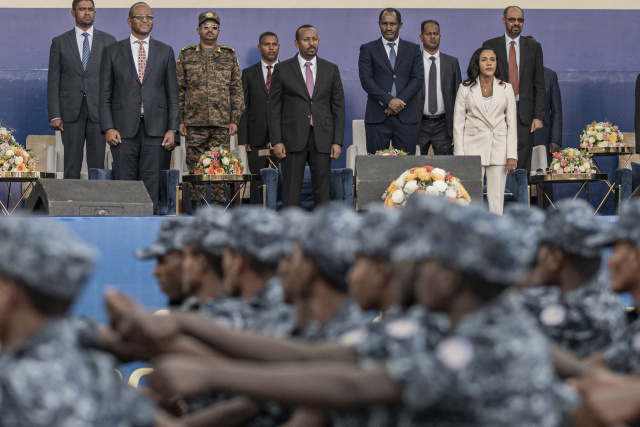 (AFP) - Hundreds of people belonging to the Amhara ethnic group were killed by rebels in Ethiopia's Oromia region over the weekend, survivors said Monday, but the insurgents denied the claims, blaming government forces for the deaths.

Fighting erupted on Saturday morning in Oromia's Gimbi district between pro-government forces and the Oromo Liberation Army (OLA), a rebel group which is branded a terrorist organisation by the Ethiopian government.

Together, Amharas and Oromos make up the vast majority of Ethiopia's 115 million people and Prime Minister Abiy Ahmed's government has previously accused the OLA of ethnic massacres.

Eyewitnesses, who spoke to AFP on condition of anonymity for safety reasons, said the attack lasted several hours, with unclaimed bodies still lying on the streets.

"I lost my 16-year-old daughter in the attack shot by a bullet from the (OLA) gunmen," one Amhara man said, adding that the rebels had blocked the main highway.

"The intention of all these attacks is to force us to leave," he said, adding that "our houses and properties have been destroyed."

"I want to leave this area, go to my ancestral region... that at least would allow me to live in peace," he said.

The Oromia regional authorities said in a statement that the OLA had "committed a cruel attack on innocents" and vowed to take strong measures against the insurgents.

But OLA spokesman Odaa Tarbii blamed the region's own pro-government militia for the killings and called for an independent investigation into the matter.

"The Abiy regime is again blaming the OLA for atrocities committed by its own retreating fighters," he said on Twitter.

"Attacks on innocent civilians and destruction of livelihoods by illegal and irregular forces is unacceptable," he said.

News of the Amhara killings comes days after the Ethiopian Human Rights Commission accused security forces of summarily executing residents in Gambella, suspecting them of collaborating with OLA fighters who attacked the southwestern region last week.

The EHRC, a state-affiliated independent rights body, said in a statement that security forces had carried out "door to door executions" in Gambella, which borders Oromia.

The OLA last year forged an alliance with the Tigray People's Liberation Front (TPLF), which has been locked in conflict with federal forces in northern Ethiopia since November 2020.

Ethiopia's government declared a "humanitarian truce" in March, allowing limited supplies of international aid into Tigray for the first time since mid-December.