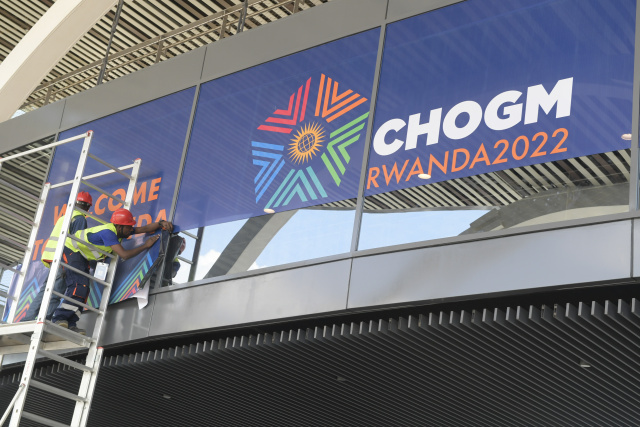 Workers are seen applying signage at the Kigali Convention Centre on June 21, 2022, the venue hosting the Commonwealth Heads of Government Meeting (CHOGM) till June 26th. A tiny nation with a tumultuous history indelibly marked by a gruesome genocide, Rwanda has undergone a dramatic turnaround in recent decades but is dogged by criticism over rights abuses and lack of political freedoms.
The former German and Belgian colony is hosting the Commonwealth Heads of Government Meeting (CHOGM) this week, 13 years after it joined the club of largely former British colonies. (Photo by Simon MAINA / AFP)

(AFP) - Leaders from the 54 Commonwealth countries gather in Rwanda under tight security this week for a long overdue but controversial summit that was twice postponed by Covid.

Flags, from the tiny Pacific island of Tuvalu to South Asian giant India, are flying at the airport and the palm tree-lined road leading to the city and the Kigali Convention Centre where the Commonwealth Heads of Government Meeting takes place Friday and Saturday.

Some $4.7 million has been spent sprucing up the capital, with President Paul Kagame keen to portray "the country of a thousand hills" in the best possible light.

But the event, which was supposed to have been held in June 2020, takes place amid outrage at Britain's migrants settlement deal with Rwanda, and questions about the host's human rights record.

A tussle for the leadership of the Commonwealth, which represents some 2.5 billion people or a quarter of humanity, is also expected, with renewed talk about the body's future role and relevance.

The fall-out from the migrant deal potentially puts Queen Elizabeth II's heir Prince Charles in a tricky spot, as he makes his first trip to the east African country as her representative.

The visit -- also the first to Rwanda by a British royal -- will notably see the 73-year-old prince meet survivors of the 1994 genocide.

But his reported criticisms of the planned migrant deportations as "appalling" could make for an awkward meeting with Kagame and UK Prime Minister Boris Johnson who back the scheme.

Britain's Sunday Telegraph said the prince fears the row, which last week saw Europe's top human rights court step in to halt the first flight, could mean the wider aims of the meeting are lost.

Amnesty International's director for east and southern Africa, Deprose Muchena, called on Commonwealth leaders to take a "firm and clear stance" against the policy.

"Member states need to seize the opportunity in Kigali to denounce this inhumane arrangement and pressure the UK and Rwanda to end the deal," he added.

Rwanda, currently locked in a spat with the neighbouring Democratic Republic of Congo over its alleged support for M23 rebels, has been a controversial choice as CHOGM host since it was announced in 2018.

This month, civil society organisations said there was a "climate of fear" in the country at odds with its glossy image abroad, including crackdowns on rights of assembly, enforced disappearances, arbitrary detention, torture and extrajudicial executions.

But they added: "The silence of the Commonwealth on Rwanda's human rights record risk undermining the organisation's human rights mandate, as well as its integrity and credibility."

The Committee to Protect Journalists said two foreign journalists who had written critical articles about Rwanda were denied accreditation to cover the summit.

The head of Rwandan opposition Development and Liberty for All party told AFP "nothing has changed" since Rwanda joined the Commonwealth 12 years ago.

"Rwanda does not respect the values of the Commonwealth, democracy, the rule of law, respect for human rights, freedom of expression," said Victoire Ingabire.

Charles has been anointed as the next head of the Commonwealth when he becomes king, taking over from his 96-year-old mother, who has championed the organisation since she came to the throne in 1952.

But there is increased discussion about a move away from the royal family as its ceremonial head.

At the same time, republican movements in some of the 14 Commonwealth countries outside the UK where the queen is head of state are gathering pace.

Another member, Australia, has also appointed a minister for the republic, in a sign of constitutional change on the horizon.

Those questions loom large over the summit, and whether a diminished global reach for the British monarchy will even affect the Commonwealth's existence.

Announcing his trip, Charles said the fact that two-thirds of the grouping's population was aged under 30 can make the Commonwealth "an unparalleled force for good in our world", particularly on issues such as tackling climate change.

But Commonwealth watchers said that young people, who have no emotional attachment to the royals, could determine its future, loosening Britain's dominance of the organisation, many of whose members are former British colonies.

"The new generation wants to question and re-evaluate the history of the empire and that is a good thing," the British economist and former Labour politician Meghnad Desai said recently.