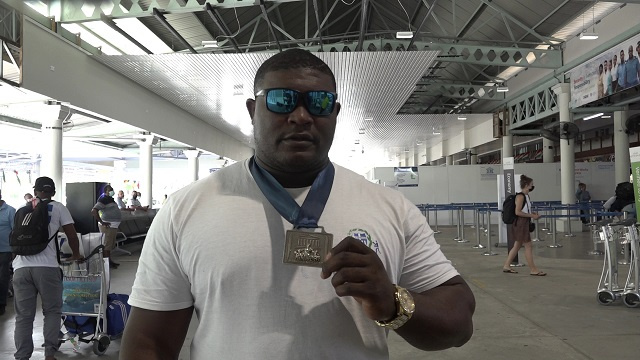 Seychelles' well-known heavyweight boxer Keddy Agnes won a silver medal at the Acropolis Cup in Athens, Greece, one of the most prestigious European competitions, which took place from June 16-19.

Agnes lost the final of the +92kg category to Ukraine's Alexander Grytsiv at the Panathenaic Stadium and took home a silver medal.

"It was a good competition, I actually won the first round of the final, where I was leading on points, but I got a cut above my eye which bothered me a bit and eventually fatigue crept in," Agnes told reporters upon his return in Seychelles.

This was Agnes' second medal in an international competition this year after winning gold at the Africa Zone 4 Boxing Championship in Maputo, Mozambique last month.

Another Seychellois boxer at the competition, Fabio Roselie, won the bronze medal. He advanced to the semi-final after defeating Greek Minas Savvopoulos 3-0. Roselie lost his semi-final bout by 3-0 against Artur Ghazaryan of Armenia, who won the gold medal after beating Cyprus' Odysseas Atmatzidis in the final.

"I think we need a lot more international exposure if we are to get better. I faced a boxer who was only 18 years old, but had already had over 200 bouts under his belt," said Roselie, who added that competing is vital in helping the boxers get better.

Another boxer representing Seychelles, an archipelago in the western Indian Ocean, at the competition was Shain Boniface. Boniface lost his opening fight 0-3 to Ukrainian Bozorboy Matyakubov in the 67kg category. The Ukrainian won the gold medal in the category.

Boniface told reporters that "it was a good tournament, where I used it as preparation for the Commonwealth Games."

He added that his opponent is ranked number two in the world and this was an opportunity to learn more.

The Seychellois boxers were accompanied by coach Rival Payet who said that the boxers did well but still need to continue training hard.

"I am satisfied with their performance in the tournament, where we did well but I felt that Keddy could have even won a gold medal, had things gone better," he added.

The boxers from Seychelles are using international competitions to prepare actively for the next edition of the Commonwealth Games which will be starting on July 29.

"Up till now we have not heard of any tournament or training camps coming up, but in the meantime, I will be trying what I can here. I hope there can be another tournament to help us better prepare," said Agnes.