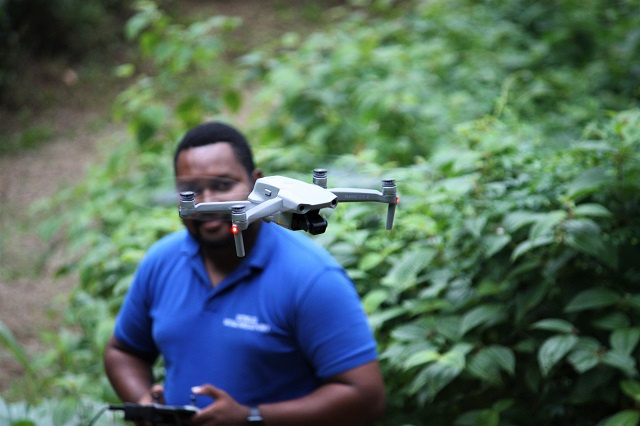 The Mavic Air 2 drones will also help the authority in fulfilling its duty of protecting habitats and ecosystems from anthropogenic and human threats. (British HIgh Commissio)n

(Seychelles News Agency) - The Seychelles Park and Garden Authority's (SPGA) received a donation of a drone on Thursday, intended to improve its ability to efficiently monitor the country's terrestrial parks and safeguard the preservation of protected areas.

Donated by the British High Commission, the two Mavic Air 2 drones will also help the authority in fulfilling its duty of protecting habitats and ecosystems from anthropogenic and human threats.

The authority's chief financial officer, Lya Docteur, said that with the added equipment, the team will have the much-needed advantage in monitoring the vast Morne Seychellois National Park and other protected areas.

"Our team, who have been involved with the Green Footprint Seychelles Project from the beginning, are especially appreciative of the donation. We recognise the hard work which has been directed towards the project and this donation further reflects the strong and fruitful ongoing collaboration between SPGA and the British High Commission," said Docteur.

The authority protects three terrestrial parks, five marine parks and three gardens, including the Praslin National Park, the Veuve Special Reserve on La Digue Island and the Sainte Anne Marine Park, among others. The authority can now increase its reach in these locations at a lower cost by using the drone.

Following the handover ceremony, which took place at the Salazie Trail in the Morne Seychellois National Park, the Deputy British High Commissioner, Matthew Harper, said that the particular location was chosen so as to "reflect the ongoing work the SPGA has done to help in the reforestation of the Salazie Trail, supported by the British High Commission."

"The Green Footprint Seychelles project demonstrates the excellent cooperation between our partners at SPGA and other local environmental experts. The donation builds on the British High Commission's continued relationship with SPGA. It is one small part of a much broader project - which has thus far culminated to around SCR 400,000 [$30,700] - supporting sustainability and conservation in Seychelles," said Harper.

The Green Footprint Seychelles project is a large-scale tree-planting initiative supporting local experts to test a marketable and scientifically developed tree-planting scheme as part of Seychelles' green recovery of tourism.